'Jews of colour' from the Middle East and North Africa  form the  majority of Israel’s population, yet both the country’s supporters and detractors elide the Mizrahi experience. This needs to change, say Analucia Lopezrevoredo and David Shraub. Fascinating piece in the Tablet. 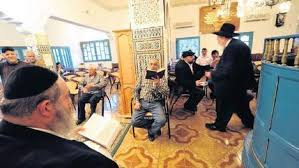 The omission of Mizrahi and Sephardic Jews in intersectional discourse is symptomatic of a larger problem. In the global imagination, the easy conflation of “Jews” and “white” has blinded many to the internal ethnic diversity within the Jewish community—especially in Israel. Non-Ashkenazi Jews are typically ignored in public discourse or respected only insofar as they confirm the prejudices and ideologies of others. While there are some organizations, such as JIMENA (Jews Indigenous to the Middle East and North Africa), devoted to elevating the profile of Mizrahi and Sephardic Jewish concerns, in general American Jewish organizations right, left, and center are notorious for being Ashke-normative—in other words, making the Ashkenazi experience the de-facto Jewish experience. This is similarly the case among critics of the American Jewish establishment, both Jewish and not.

Mizrahi Jews represent a conundrum for Jews and non-Jews alike accustomed to the typical Eurocentric modes of characterization. “Jews living in the Middle East? North Africa? Jews identifying as Jewish and Arab? Jews having Arab names and speaking Arabic?” Yet for more than 2000 years, Jews lived among Arabs, spoke their language, and shared many of their customs. These Jews were responsible for contributing the Babylonian Talmud, and centuries later were crucial in revolutionizing the economies of cities including Aleppo, Baghdad, and Cairo.

Unfortunately, Ashkenazi history and culture primarily dominates Jewish dialogue and experiential learning, and Jews are erroneously being uniformly labeled “white” as a result of it. It’s Yiddish—not Ladino or Arabic—that Jews and non-Jews incorporate into their daily vocabulary. It’s the Holocaust—not the expulsion and exodus of nearly one million Jews from the Middle East, North Africa, and Iran—that students learn about in schools. And it’s kugel and gefilte fish—not kubbeh and borekas—that are served at community events and celebrations. This lack of knowledge becomes even more troubling when one considers that included in those unaware of this history are Jews that grew up in a Jewish home, attended synagogue, and received some form of Jewish education.

Read article in full
Posted by bataween at Tuesday, January 26, 2016

There's an error with the timeframe: the Arab conquests of the MENA region took place around 650-700 CE, so Mizrahi Jews have only been cohabitants with Arabs (with the exception of Yemenites) for about 1300 years.

Scott, if you are referring to Muslim Arabs, then you are right. But Jews/Israelites were in contact with Arabs long before Muhammad, before Islam. Ishmaelites and Midianites are mentioned in the books of Genesis and Exodus in the stories of Joseph and Moses. Kenites [Cainites] and Amalekites are mentioned in later books, in the historical books. May I remind you that Moses married a daughter of the priest of Midian? That Ishmaelites were involved in the story of Joseph. That Kenites (Cainites) joined Israel against the ancient enemies of the Israelites. And that Amaleq was considered Israel's bitterest enemy. King Herod was son of an Edomite/Idumaean father and an Arab mother. He and his family had converted to Judaism. This was a bitter rivalry between one of Herod's wives, a daughter of the Hasmonean dynasty, and Herod's mother. Herod and the foregoing Hasmonean kings were often at war with Arabs east of the Jordan and the Dead Sea.

correction:
THERE was a bitter rivalry . . .

Actually, Sephardic and Oriental Jews are white insofar as Arabs, southern Italians, Greeks, etc. are white. The US Census Bureau includes Arabs and similar peoples among whites. But the article definitely has a point and I agree that Sephardic/Oriental Jews should not be given such short shrift by the generally Ashkenazi Jewish establishment. And I agree that when the article talks about whites they mean Europeans north of the Mediterranean, Jewish and non-Jewish alike.