The New York Times has issued an unprecedented apology for an article by Diaa Hadid about property disputes in the old city of Jerusalem. There could be some 100 such properties, according to an Arab source. The NYT correction admits that the homes concerned were owned by Jews before they were expelled during the 1948 Arab-Israeli war. The Israeli courts ruled against the Arab tenants only because of non-payment of rent. Contrary to Hadid's claims,  Arabs have received fair compensation for properties they may have abandoned in West Jerusalem, while not a single claim for property lost by Jews in Arab countries has been honoured. 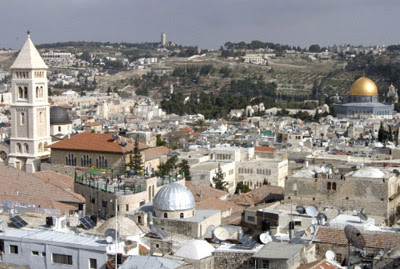 "The Jerusalem Journal article on Jan. 15 about Palestinian residents of Jerusalem’s Old City who face eviction by Israeli organizations gave an incomplete description of the legal disputes in several cases. The descriptions were based on the tenants’ accounts; the article should have included additional information from court documents or from the landlords. (The landlords are organizations that have reclaimed properties owned by Jews before Israel was established in 1948.)

In the case of Nazira Maswadi, the article said her new landlord was trying to evict her based on a claim that her estranged husband was dead (he is still alive). In fact, the landlord claims in court filings that the Maswadi family has not proved that it has paid rent.

In another case, the article quoted Nawal Hashimeh as saying she was being evicted for replacing a door to her apartment. But according to court documents, her rent payments had also been rejected because they were submitted by her son, whom the landlord said it had no contractual relationship with. (The landlord also claimed that three rent checks fell short of the amount owed.)
In a separate case, the article said Nora Sub Laban faced accusations that she had not continuously lived in her apartment, though she claimed that she had never left it. While the article said that Ms. Sub Laban had been battling eviction efforts for four decades and that the Israeli Supreme Court must now decide whether to consider her appeal, it should have noted that an Israeli court in 2014 upheld a lower-court finding that she had not returned to live at the property after renovations were completed in 2000 or 2001.

The media watchdog CAMERA's critique led the NYT to issue its correction:

"Hadid is also extremely misleading or completely wrong – it depends on how devious she is trying to be – about the relevant Israeli law regarding compensation for lost property, when she claims that "compensation [is] based only on the 1949 value of the home or land."

The actual formula is the 1949 value, with yearly interest and cost of living (or inflation) adjustments. Arabs who lost property in Israel are eligible to file for compensation from Israel's Custodian of Absentee Property. As of the end of 1993, a total of 14,692 claims had been filed, claims were settled with respect to more than 200,000 dunums of land, more than 10,000,000 NIS (New Israeli Shekels) had been paid in compensation, and more than 54,000 dunums of replacement land had been given in compensation.

Israel has followed this generous policy despite the fact that not a single penny of compensation has ever been paid to any of the more than 500,000 Jewish refugees from Arab countries, who were forced by the Arab governments to abandon their homes, businesses and savings.

In addition, it should not be ignored that many journalists, including Hadid, write about Jews living in the Old City's Muslim Quarter as if this violates some unwritten moral or legal code, but they never write about the large number of Arabs living in the nearby Jewish Quarter.

For example, according to the 1995 Census of Population and Housing at least 480 Muslims lived in the Jewish Quarter, making up 22.5% of the quarter's population. In contrast, Jews made up just 1.68% of the Muslim Quarter's population. Even in absolute terms, the 480 Muslims living in the Jewish Quarter outnumbered the 380 Jews living in the much larger Muslim Quarter."

It's a disgrace that the Arab Jews still haven't recieved compensation for the assets stolen.

If the Times thought it could get away with denying the holocaust, they would.

Many Jews lived in the Muslim and Christian Quarters by the year 1900, 116 years ago. Prof. Yehoshua Ben Arieh said that in 1900 Jews were the majority of the population in the Old City of Jerusalem. [Yehoshua Ben Arieh, Jeusalem in the 19th Century, Vol. 1, The Old City
(Jerusalem: Ben Zvi Institute, 1984; New York: St Martin's Press), p 400]

Jews were driven out of the Old City, particularly but not only the Muslim Quarter, in a series of pogroms starting in April 1920, and then in 1929, 1936-39, 1947. These pogroms had encouragement and/or acquiescence from the British authorities in the country.