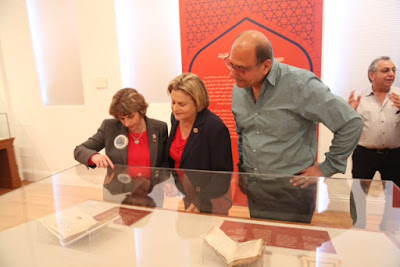 She called the archive 'an important part of the Iraqi-Jewish community's collective memory.""It must be preserved and shared for generations to come," she said. To hear Congresswoman Ileana Ros-Lehtinen's speech to Congress, click here.

Ms Ros-Lehtinen's speech followed a personal tour of the archive in which she was accompanied by members of the Iraqi-Jewish community Maurice and Hillel Shohet and Abe Lerner (Moallem).

The archive's highlights are now being exhibited at the Jewish Museum of Florida. So popular has the exhibit - Discovery and Recovery -  been, that it has been extended to 6 March 2016.

Congresswoman  Ros-Lehtinen explained to Congress how the collection of documents had been confiscated from Iraqi-Jews by Saddam Hussein, only to be 'discarded'. The archive was found by US servicemen in the flooded basement of the secret police HQ in Baghdad in 2003 and painstakingly restored by the US National Archives and Records Administration.

In 2014 Florida Congresswoman Ros-Lehtinen, together with Steve Israel, a congressman from NewYork, had led the fight to keep the archive from being returned to Iraq, where the Jewish community is on the verge of extinction.


This Times of Israel piece (with thanks : Lily and Imre) gives a good overview of the story of  the archive. It contains US serviceman Gonzales's personal account of how the archive was discovered, as well as testimony from Harold Rhode, a Pentagon analyst and orthodox Jew in Baghdad, who was determined to save the archive. Both believe that the archive should not go back to Iraq after its tour of the US, in spite of an agreement made between the US State department and the then provisional government of Iraq.


Once restored, the artifacts went on display to the public at the Lawrence F. O’Brien Gallery at the National Archives in Washington, DC, in November 2013. The exhibition then moved to the Museum of Jewish Heritage in New York City in 2014.

That was supposed to be the last stop in the US before being sent back to Iraq that summer as part of a 2003 agreement with the Iraqi government. However, just a few days before the New York exhibition ended, a deal was reached after Jewish groups and members of Congress had called for the US government to reconsider the terms of the original agreement.

On May 14, 2014, Lukman Faily, the Iraqi ambassador to the US, said in a statement that his government had authorized an extension period in which the exhibit may remain in the United States and be displayed in other cities. No specific return date was given.

A new tour began just over a year later, starting at the National Archives at Kansas City, Missouri, and then continuing on to the Richard M. Nixon Presidential Library and Museum in Yorba Linda, California. The collection arrived at the Jewish Museum of Florida in Miami Beach in December 2015, just in time for Hanukkah.

“When I heard it was a possibility to host [the exhibit], I sent a request very early on, a couple years ago,” museum director Arnowitz said. “I was holding the time slot in hopes that we got it. It’s our peak season when we get visits from all over the world.”

The Iraqi Jewish archive is currently on display at the Jewish Museum of Florida in Miami Beach until March 6, 2016. (Courtesy: Richard Tenorio)

“The Iraqi Jewish Archive is in the temporary custody of the US National Archives and Records Administration for conservation, preservation, digitization and, to the extent practicable, exhibition,” Department of State spokesperson Noel Clay wrote in an email. “The project is proceeding in accordance with the August 2003 agreement, with both governments remaining in regular contact on its progress.”

Several individuals who were present when the collection was discovered during the Iraq War, however, have voiced concern over what will happen once the tour ends.
The US tour is scheduled to end in the summer of 2016 and at some point following, the exhibition is planned to be shown at the Iraqi National Archives in Baghdad. “That’s its final venue,” exhibit director Royse said.
Some have called for a permanent destination outside Iraq — either in the US or Israel.

“To whom does it belong?” asked Rhode, who has grappled with this question ever since he navigated in waist-deep waters to rescue a floating Torah scroll in Iraq over a decade ago. “The answer, to me, is that it belongs to the people who used it, the Jews of Iraq… It belongs to them, not the Iraqi government.”
Rhode and others believe the time is ripe to reexamine the terms of the agreement under which the artifacts arrived in the US.

“International law says you can’t take the patrimony. When you take over a country, you can’t steal its treasures,” Rhode said. But, he followed that up by saying: “The US government has taken millions and millions of documents from the period when Saddam Hussein ruled Iraq. They’re still in the US. We’re not giving them back.”

He said that the artifacts on display in Miami Beach were stolen by Saddam. “The Jews did not relinquish this material on their own will; they did it under duress, having no other option… We know how and we know when. They’re in a limbo now. Who can you give it back to? Will it be safe?”

Gonzales, who led the recovery effort on the ground, said the documents will not be safe in Iraq.

“In my opinion, it should never be returned to Iraq, for all the obvious reasons,” he said. “I think there’s the historical significance, and I feel strongly that if they are to return, there is no guarantee they will exist one year from now. [In the US] they’re in the hands of stewards interested in safeguarding and protecting them.”
Another veteran from the rescue team had a different take.

“If it can be safely secured, preserved and looked after, it would be very meaningful if it can be back in Iraq, with the community caring for it [from which it] originated or belonged to,” countered Kirt Lewis, who served as a pastor both before and after his tour of duty in Iraq. “I can understand if there is any question as to whether or not it can be safely secured. I don’t know the particulars of the situation.”

Perhaps the uncertain state of the Iraqi Jewish collection mirrors the uncertain recent history of Iraq itself, currently embroiled in a civil war between the national government and the Islamic State.

Former New York Times reporter Miller, who controversially reported from Iraq while on the hunt for WMD, told The Times of Israel, “I would like to see [the exhibition] one more time. It was the most productive thing I did in Iraq.”
“It seems to me that the material ought to belong to the Jewish community, the Iraqi Jewish community,” Miller said, adding that there are more Iraqi Jews now in the US than in Baghdad.

In Rhode’s opinion, the ideal destination for the collection is the Museum of Babylonian Jewry outside Tel Aviv. “It’s the only museum of Iraqi Jewish heritage that exists,” he said.

Obama will of course demand and require they be returned. I would prefer they be burned in front of the White House before that happens.