Degraded, despised and exposed to all kinds of abuse: such was the condition of the Jews throughout the Muslim world in the mid-19th century. Rev JW Brooks set down his observations in The history of the Hebrew Nation, published in 1841. Via Elder of Ziyon. (Emphasis is EoZ's) (With thanks: Michelle): 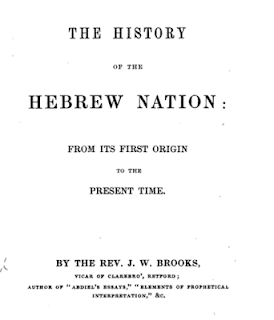 "As regards the present political condition of the Jews, notwithstanding the decrees in their behalf which have been passed, the Christian reader will be deceived if he concludes that the reproach of Israel is yet “rolled away from off all the earth.” The public mind has recently been startled by the report of cruelties and injustice to which the Jews of Damascus and Rhodes have been subjected, as if such instances of persecution and oppression were a novelty in these times. But in the East the Jews have all along been exposed to them, though their wrongs have failed until now in arresting particular attention. In the year 1823, at the same Damascus, all the Jews suspected of having property were thrown into prison, and compelled to pay forty thousand purses or lose their heads. At Safet, in 1834, their houses were stripped, and great personal cruelties inflicted upon them, for the like purpose of extorting money; and generally in Syria they were compelled to work for the Turks without payment, being bastinadoed if they remonstrated. The lowest fallaah would stop them when travelling, and demand money as a right due to the Musselman; which robbery was liable to be repeated several times a day upon the same Jew. Throughout the East they are obliged to affect poverty in order to conceal their wealth ; the rulers in those countries making no scruple of seizing what they can discover. And though not interdicted from holding land, yet the enormous taxes demanded of them (equal to one-third of the produce, whilst the Mahometans pay only one-tenth), effectually exclude them from agriculture.

"The occupation of Syria by the Egyptians did not mitigate the hard condition of the Jews of Palestine' They were still defrauded and insulted; the commonest soldier would seize the most respectable Israelite, and compel him by blows to sweep the streets, and to perform the most degrading offices. The contempt indeed in which they are held by Mahometans, however difficult to be accounted for, exceeds that which they have experienced in Christian lands. In the East they are truly become a proverb, the term Jew being applied despitefully, as the most reproachful and degrading known.

"Even the Christians of Syria manifest a degree of malignity and contempt for the Jews, not witnessed in other places: the Nestorians in particular entertain a bitter hatred toward them; and were a Jew to set his foot within the church of the Holy Sepulchre at Jerusalem, he would be stoned by the Christians of all denominations. ...

"In Persia the condition of the Jews is worse even than in Syria. Often whilst they are assembled in their synagogues, a soldier enters with an order from the Shah for money; they are compelled to work without payment; and their women are unceremoniously taken from them, without their daring to murmur. Their poverty and wretchedness may be best understood by the following graphic description given to Dr. Wolff, before he visited Shiraz, by a Mahometan: “Every house in Shiraz with a low, narrow entrance is a Jew's. Every coat much torn and mended is a Jew's. Every man with a dirty camelhair turban is a Jew. Every one picking up broken glass and asking for old shoes and sandals is a Jew." This description was afterwards confirmed by the doctor's own observation, who found old and young in the street of their quarter sitting and crying to every stranger, with outstretched hand and feeble voice, “Only one pool (penny) for poor Israale !”

"In Morocco they are equally ground down by a barbarous despotism. The Moors consider that the object of a Jew's birth is to serve Musselmen, and he is consequently subject to the most wanton insults. The boys for their pastime beat and torment the Jewish children: the men kick and buffet the adults. They walk into their houses at all hours, and take the grossest freedoms with their wives and daughters, the Jews invariably coming off with a sound beating if they venture to resist. In 1804 those of Algiers were subjected to horrible tortures, being suspended from the walls by long ropes with hooked nails at the ends, merely because they had unsuspectingly lent money to persons who were secretly conspiring against the Dey; nor were they released without the payment of a large sum."

Read post in full
Posted by bataween at Sunday, January 31, 2016

A Greek Cypriot monk living in Jerusalem and attached to the church of the Holy Sepulcher in that same period, wrote a few years before Brooks' visit that Muhammad [Mehmet] Ali of Egypt was actually kinder to the dhimmi peoples, Jews and Christians, than the Ottoman state was. After defeating the Muslim revolt in Israel in 1834, he allowed the Jews to repair the roof of their Synagogue, which had previously not been allowed under the Ottomans. Ironically, the governor in Damascus of the same Mehmet Ali, persecuted the local Jews in the notorious Damascus Affair, referred to by Brooks. This persecution in Damascus was to an extent instigated by the French consul, Monsieur Ratti-Menton, whereas Mehmet Ali in those days was allied with the French against the Ottoman Empire and other Western powers, UK, Russia, Prussia, etc.