Sherzad is lying about Jews in Kurdistan 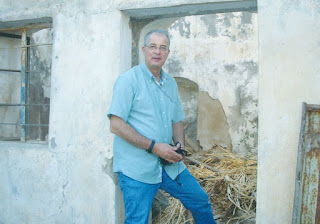 Mordechai Zaken, an Israeli expert on Jews in Kurdistan, visiting a synagogue in Zakho.

An Israeli expert on Kurdish Jews has exposed the recent 'charm offensive' by the head of the Directorate of Jewish Affairs in Kurdistan as a 'publicity-seeking, confusing and damaging' exercise to attract financial support from US Jews. Mordechai Zaken says that Sherzad's claims that there are 430 Jewish families are without foundation. There are however, hundreds of Muslim Kurds with Israeli passports who attempted a failed aliya in the 1990s. Zaken has nothing to say about Sherzad's role in the abduction of the editor of the Israel-Kurd magazine, Mawlud Afand.  The Jerusalem Post reports:

Sherzad Omer, the representative of Jews in the Kurdistan Regional Government (KRG) Ministry of Endowment and Religious Affairs, has recently been on an a public relations offensive, disseminating information on “Kurdish Jews” in the local and international media.

A leading Israeli expert on the Kurds and a former Arab affairs adviser to the Prime Minister’s Office told The Jerusalem Post that continued publicity efforts by the KRG to promote “Jewish Kurds” is related to the fiasco of the immigration to Israel of mostly Muslim Kurds in the early 1990s.

“Unfortunately, some KRG officials appointed a publicity- seeking person for the important task of supervising Jewish historical sites – someone who does not distinguish between truth and lies in his eagerness,” said Dr. Mordechai Zaken, head of minority affairs in the Public Security Ministry.

“I hope they would notice that this publicity campaign is causing confusion among the wider public and is damaging the KRG,” said Zaken, who has studied the Kurds for over 20 years. “It may also hurt the good relations and mutual sympathy between Israelis and Kurds and cause unnecessary conflict in the press as a result of the irresponsible declarations of Sherzad.”

“There is no Jewish community in Kurdistan – no synagogues, no Jewish activity whatsoever,” he continued. There were no forced conversions in Kurdistan, he added.

Of those that made aliya, a small portion claimed they wanted to convert to Judaism, but they failed the examination of the rabbis. “These are the facts,” Zaken clarified.

Last week, Agence France-Presse reported the latest press release from Omer’s ministry, about a ceremony in Kurdistan marking the pogrom, or Farhud as it is known, that erupted in 1941.

Omer spoke more carefully than before, stating that there are currently 400 families that “self-identify as Jews in Kurdistan – but are still officially registered as Muslims.” He added that families who converted to Islam but “are Jews in origin” number in the thousands.

He also admitted that there was no active synagogue in the area, but said he hoped that would change soon.

Zaken, commenting on the motive behind this event, said, “Perhaps this PR campaign is directed to American Jews, since he refers to them and asks for financial support.”

“Why have Jews suddenly been discovered in Iraqi Kurdistan? Why has the KRG created a government position for Kurdish Jews when there is no Jewish community there?” Dr. Zaken explains: “If the task is to rehabilitate and restore old Jewish sites and synagogues, which were neglected and deserted – a task which I personally requested the KRG administration to do while visiting there in 2012 – then this is an important cause.”

However, “statements about the so-called existence of a Jewish community in Kurdistan are confusing and untrue.”

Read article in full
Posted by bataween at Tuesday, December 08, 2015