There are 20 Jews born in Myanmar, but the community is growing, with 80 - 100 Jewish expatriates now living in the country. Sammy Samuels is determined to follow in the footsteps of his father Moses Samuels, who died in June of this year aged 65. Sammy is leading the Yangon  community, as it prepares to host a Hanucah candle-lighting ceremony. (The festival begins this evening and lasts for eight days). Report on the BBC website (with thanks: Nelly, Tim and Ron).

"Jewish people came here in the 19th Century from Iraq and Iran. They traded goods such as coffee and teak between Burma, as Myanmar was known then, India and the Middle East.

By World War Two, when Burma was a British colony, there were about 2,500 Jews here, enjoying a wonderful life. We had a Jewish school with more than 200 students and there were dozens of Jewish-owned stores in downtown Rangoon (now Yangon). In 1910, the city even had a Jewish mayor.

But when the Japanese came in 1942, they gave the Jews of Rangoon a hard time. My grandfather was interrogated and the synagogue was closed for two months while they searched for evidence that we were collaborating with the British. They found nothing and left us alone. But it was enough to make us afraid, and many Jewish families left.

Then, in 1962, the military took over and nationalised many businesses. This led to a second exodus of Jews. Incidentally, as well as taking their Torah scrolls with them, they left the country without Coca-Cola. The drink was sold by the Solomon family, which owned a bottling plant in Rangoon. After they left, Coca-Cola didn't go on sale again officially until 2012.

But through all this, my family - and just seven others - stayed. My grandfather Isaac Samuels felt very strongly that Jews should remain in Burma and that if we left, the synagogue would be taken over by the government. So in 1978, as my grandfather lay on his deathbed, my father promised him that the Samuels would stay as long as we could.

I was born two years later, the youngest Jew in the country. I'm 35 now, and I am still the youngest." 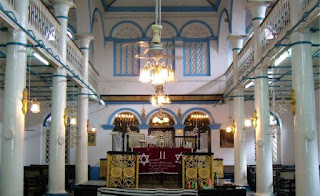 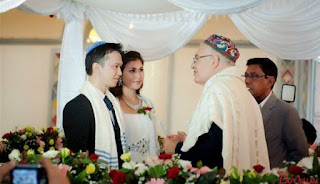 Top: Musmeah Yeshua synagogue is in a Muslim area of the capital Yangon. Below: Samuel Samuels' wedding was the first for 27 years.

off topic//
Veronique Chemla gives notice of a program at the Musee de la Shoah in Paris commemorating the round up raid ---- of Jews in Tunis on 9 December 1942, about a month after the American landing at Algiers. Some Tunisian Jews were sent to death camps in Europe.