Daniel Pipes is a well-known, Arabic-speaking, global authority on the Muslim world, with a regular column in the Jerusalem Post among others. So in an interview about the Muslim migration into the West, it came as a surprise to hear him make certain statements that are uncharacteristic and even historically dubious. Point of No Return sets the record straight (with thanks: Lily):

Update: When challenged to amend his remarks, Pipes replied:

"The latter (PoNR)  seems to think I am saying Jewish life in the Muslim-majority countries was wonderful. But I am not saying that; I am saying it was better than in Christendom. I really don't think there is any argument there. " 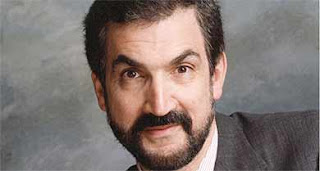 Pipes: Yes, the Muslim world is at a low point today, going through a crisis, and the West is not going through a comparable crisis. But this is but a brief moment in time. In 1943, where would you have rather been living?

In Germany or in Iraq? In Italy or in Senegal? Let's not say that the Judeo-Christian world is so wonderful on the one side, while the Islamic world is so horrible on the other.

Pipes makes an unfortunate comparison between Germany and Iraq. If you were unlucky enough to be caught up or killed in the pro-Nazi pogrom called the Farhud,  it would have been small comfort to be told that Germany was worse.

Pro-Nazi forces in the Arab and Muslim world were defeated because Nazism lost the war. But Nazi-style ideologies still endure today - and threaten the West - in the form of Islamist 'fascist' groups like the Muslim Brotherhood, who glorify violence and antisemitism.

Pipes then goes on to make the following controversial statement:
" In the long history of Jews living in predominantly Christian and Muslim lands, it is striking to note that from the origins of Islam until the close of World War II, that is to say from 622 until 1945, a very, very long period of time, Jews almost always fled from Christian-majority countries to Muslim-majority countries. They voted with their feet because they rightly expected to be better off in Muslim countries. It's only the last 70 years, since 1945, a moment in time, that Jews have fled Muslim-majority countries for predominantly Christian countries.

Not true: Jewish tribes were massacred by Muhammed in 7th century and ethnically cleansed from the Arabian peninsula, except  at the southern tip in Yemen.

Jewish communities lived in the Middle East and North Africa long before these countries became Muslim.

Their numbers were continually eroded by pressure to convert, and the occasional forced conversion. The so-called Golden Age in Spain was interrupted by the Granada massacre of 1066.

Jews in Yemen and Iran suffered massacre, degradation and conversion  under Shi'ism. In the Maghreb, al-Maliki Sunnism treated Jews particularly harshly, after wiping out the Christian presence in North Africa.

Much is made of the fact that Jews fled the Spanish Inquisition for the Maghreb,  Turkey and Eretz Israel, but Sephardim also went to Holland and Northern Europe, and re-established the British-Jewish community in the 17th century.

Jews fled 19th century Iraq for India and the Far East, not just to seek economic opportunities along the trade routes of the British empire, but to escape the oppressive rule of Daoud Pasha in Iraq. In the late 19th century Jews fled blood libels and the Ottoman draft in Syria for the UK, the US and Latin America.

The great mass of Jews in Arab and Muslim lands could not escape. With the dawn of the colonial era, Jews fled Arab rule whenever they could - seeking the protection of western powers and a western passport.

Deliverance from persecution only arrived in 1948, when three-quarters of Jews in the Middle East and North Africa fled Arab rule for Israel - the only country which would accept Jews unconditionally. The rest went to the West, not because it was Christian, but because it was democratic and protected civil rights.

Read transcript in full
Posted by bataween at Tuesday, December 22, 2015

Idiocy. He's undermining the fact that Jews have always been in what are now Muslim countries which influences so many anti-Israel protesters and anti-Semites

He supported the Oslo peace process which led to our massive death toll in Israel and missiles over Tel Aviv 2 years ago.

I have never understood why Daniel Pipes has been so influencial and given a column in the Jerusalem Post.

As a non Arabic speaking Ashkenazi I've always been suspicious about the repeated trope of Muslim countries being so much better for Jews than Christian ones. It is nice the trope corrected.