The Jewish press here and here are enthusiastically reporting that the late King Mohammed V of Morocco has been posthumously honoured for 'protecting' his country’s 250,000 Jews during World War II. Some fact-checking is sorely needed, because  the Moroccan Sultan actually signed every anti-Jewish decree presented to him by the Vichy authorities who ruled Morocco. For proof that Jews  suffered persecution in Morocco between 1940 and 42, look no further than the fact that they have been declared eligible for 'Holocaust' compensation. 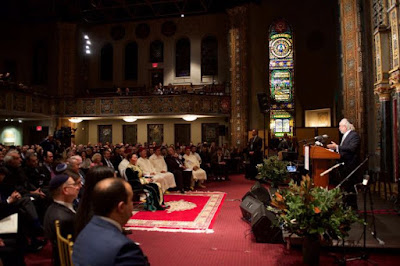 KIVUNIM, the Institute for World Jewish Studies honored the king with the first The Reverend Martin Luther King Jr. – Rabbi Abraham Heschel Award, to mark the organization’s 10th anniversary. The honor was presented to granddaughter Princess Lalla Hasna of Morocco on Sunday at New York City’s B’nai Jeshurun synagogue as part of the group’s three-day conference to mark its milestone.

Kivunim is a gap-year program that sends Jewish students to 12 countries each year, including India, Greece, Turkey, Germany, Hungary, Czech Republic and Morocco.

During World War II, King Mohammed V kept the lives and property of the country’s Jews under his protection, and did not subject them to the Vichy Laws.

Later on, in response to anti-Jewish rhetoric in the wake of the creation of the State of Israel, Mohammed V warned Muslims not to hurt Moroccan Jews, reminding them that Jews had always been protected in Morocco.

Andre Azoulay, a Jewish advisor to Morocco’s King Mohammed VI, said in a statement read on behalf of the king that: “Today, we need, more than ever, to ponder the lessons and relevance of this part of history in order to stand up more forcefully to the deadly aberrations of those who are hijacking our cultures, our faiths and our civilizations.

What is the truth about Mohammed V? What role did King Mohammed V actually play? Point of No Return comments:

Surrounded by a group of Judeophobic advisers like the antisemite al-Mokri, it was probably remarkable that the King did not support Vichy more enthusiastically. Journalists from the Moroccan Tel Quel magazine reassessed the king's role. 'Just but powerless', they concluded.

As the historian Michel Abitbol explains : "People forget that real power lay with the Resident-general of the French protectorate ( Abitbol told Information juive - July/ Aug 2008 - Les juifs d'Afrique du Nord sous Vichy). The King kept the trappings of sovereignty, but had no way of opposing the French, unless he put his throne at risk, as he did in the early 1950s.

In the 1940s, however, the king had no choice but to countersign French edicts, such as the notorious 1930 Berber Dahir, a real blow against Islam, and the anti-Jewish Vichy laws. On the personal level, however, he was sympathetic to the many Jews in his entourage. But as the 'statesman', he was forced to sign. "

It is not true to say that His Majesty (Mohammed V) managed to oppose the enforcement of the racist Vichy laws against Moroccan citizens of the Jewish faith.  Mohammed V signed every single anti-Jewish decree. There were decrees forcing the Jews back into their ghettos, instituting quotas or bans in higher education and restricting them in their professions. But he procrastinated on some, keeping them in a drawer unsigned for a month, and tried to reassure a Jewish delegation, who came to see him in an armoured truck, that the decrees meant nothing.

Was the King of Morocco a righteous gentile?
Posted by bataween at Wednesday, December 23, 2015

Surrounded by a group of Judeophobic advisers like the antisemite al-Mokri, it was probably remarkable that the King did not support Vichy more enthusiastically.

This is a weak argument, if it is meant as one. Everything indicates they didn't see things the same way.

El Mokri essentially served the French Resident General. He was already there when Mohammed V was crowned Sultan. He had no problem switching allegeance to Mohammed V's rival Arafa, whom the French crowned as Sultan as soon as they sent Mohammed V to exile in Corsica in 1953.

Just to give an idea how the royal family felt about El Mokri, with the independence all his assets were nationalised and nothing was left to his heirs.

More telling is the fact that his palace in Rabat, Dar El Mokri, was turned by Hassan II to an infamous torture prison for political prisoners. Abraham Serfaty spent time there.

The vast majority of Moroccan Jewish community who made Alya still believe that the king M5 did protect them from the Nazi led Vichy regime. This position stems from the fact that they survived the anti-jewish decrees and roundups and large number of them made it right time to migrate (flee) with the help and push of several international Jewish organizations. The timing of the Moroccan exodus is also crucial in understanding this position. Leaving during Vichy time and just after 1948 creation of Israel looks pretty much a salvation from a political view point (surviving genocide) and religious view point (re-connecting with Haeretz). For too many uneducated jews, the words of M5 (not his deeds) ring a bell of Lord Protector (Sorry for Oliver Cromwell pun).

In sum, yes, M5 did say that Jewish Moroccans were first and foremost Moroccans citizens and that they were his subjects and to whom protection should be extended. Why should it be extended, I thought it was given by citizenship. However, words mean nothing when it comes to the Arab-Nazi nexus of intended genocidal policies. It is deeds and actions that count.(Sorry I do not mean to assume the role of deciding who and who should not be among the Yadvashem list of the righteous among the nations)..

The fact that M5 advisors had their field days despite the obvious fact that the Germans never occupied Morocco or Algeria for that matter, should at least raise doubt about the Monarchy true intent of protecting its Jewish subjects. The fact that many Moroccan as well as Algerian Jews died and suffer in the same fashion as their Ashkenazi counterparts. And we all know the countless other Moroccan and Algerian Jews who were caught in France during the terrible German purges in occupied as well as the unoccupied France which ended up in the death camps of Eastern Europe. The M5 administration found it easy in rounding up people that could get their hand on (all of them men of working age) to built the German planned the trans-saharian railway, which ended up creating (according to reliable sources)about thirty labor camps. The most notorious in Morocco was that of Bouarfa. I visited the site in 1998. Many Jewish young men perished under extreme conditions(see Robert Setloff, book and excellent documentary on the subject). I guess the desert environment required new methods of torture and slow death.

If the current Moroccan monarchy plays the ritual commemoration of M5's help of "his" Jewish subjects for the mediatized symbolic rapprochement, that's fine with me. But it is only symbolic, it means something on the surface only. In July 2015, a Moroccan website using the protocols of Elders of Zion forgery made a Youtube demonizing the Rothchilds and Israel for all the current problems in the Middle East and the world due to their control of everything. I read later on that the Moroccan authorities believe that the website was from an other Arab country and not Morocco.