Every Israeli child will learn about persecutions in Middle Eastern countries, just as they learn about those in Europe, said minister Gila Gamliel at the commemorative event for Jewish refugees held at the UN on 1 December. Report in Israel Hayom : 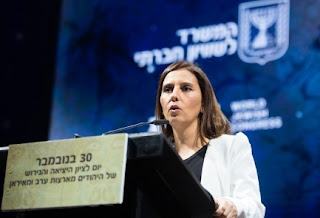 Thousands of people attended Israel's first (actually  2nd - ed) official commemoration event for Jews expelled from Arab countries and Iran, held in Jerusalem on Monday.
Social Equity Minister Gila Gamliel spearheaded the initiative, calling the event "Longing for Home."
The ceremony began with a moment of silence for Jews killed in pogroms in Arab countries and Iran. Afterward, emigrants from those countries told their stories, and performers took the stage. Among the performers were singer Kobi Oz, who is of Tunisian heritage; actress and singer Liraz Charhi, of Iranian descent; musician Gilad Segev, of Syrian descent; musician Haim Oliel, of Moroccan heritage; musician Yair Dalal, of Iraqi descent; singer Dikla, of Egyptian heritage; singer Rita Shalhoun, of Lebanese descent; and actor-singer Guy Zu-Aretz, whose family is from Libya. The entertainment came to a close with a performance from the Piyut Ensemble, a group of musicians from diverse backgrounds.


Gamliel said the ceremony corrected a historical injustice -- the lack of acknowledgment of the sufferings of the more than 800,000 Jews who were forced to flee or were expelled from Middle Eastern and North African countries in the 20th century.


"We will work to introduce Jewish heritage from Arab countries and Iran to the Israeli education system," she said.