To acclaim in the Kurdish and Israeli news media, the Kurdish Directorate of Jewish affairs has been staging an exhibition of photos and documents and a candle-lighting ceremony to commemorate the expulsion of Jews from Iraq and Kurdistan. A visit from Israel by the kippa-clad analyst of Kurdish-Jewish affairs Zack Daniel lends legitimacy to the event. But there are no Jews left in Kurdistan - to quote an expert - and one source casts doubt on the Jewish credentials of Sherzad Omar Mahmoud Mamsani, the Directorate head. It alleges that Mamsani is an Iranian spy with no Jewish links. In 2012, PoNR posted a report which named Sherzad Mamsani as a protagonist in the abduction and murder of Mawlud Afand, editor of  the Israel-Kurd magazine which Mamsani now claims to have published himself. 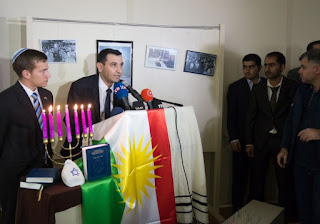 Zack Daniel from Israel stands alongside Sherzad Mamsani at the ceremony

Here is an interesting report quoting the Iraqi journalist Mustafa Saadoun (writing in Al-Monitor, reported by JP Updates) on the Jews of Kurdistan in the early 20th century:

"The Jewish Encyclopedia of 1906 reported that infighting between the Kurdish tribes created issues for the Iraqi Jews living in the region and that Jewish burial grounds there were desecrated. It also listed the Jews in Kurdistan during those times.

“The following is a list of the Jewish communities of Kurdistan (1881): Amidyah: About 50 families; Bajerga: 40 to 50 families. Formerly there was a large Jewish community here, whose members dealt in salt and other articles, but being forbidden to trade were obliged to leave the place. The few remaining are poor; Bashkala: 140 families; Bitanura: 40 to 50 families. There is in the neighborhood a large cave which is supposed to contain the grave of the prophet Elijah. Israelites from other districts make pilgrimages to it. A few of the Jewish inhabitants are in easy circumstances;  Daya: 250 families; Deze: The seat of government; situated in a valley surrounded by fifty villages. There are from five to ten Jewish families in each village, their synagogue being at Deze, which has ten Jewish families. The Jews living in these villages use the Kurdish language, even in reading the Law;  Eshnu: 80 families. There is a synagogue containing five or six Torah-rolls. Jews possessing fifty dollars are considered rich; Jezira: 80 families. Most of the men are cobbler; Karada: 80 families. These are for the greater part farmers, and are well thought of by their neighbors. They all live in easy circumstances; Maredin: 50 families; Mia-vandan: About 100 families. This place is partly under Turkish rule and partly under the authority of the Shah of Persia; Nakada: 60 families. Most of the Jews are linen-weavers and tailors; Neri: 50 to 60 Jewish families. Both Jews and Armenians are much oppressed. The Jews are not allowed to blow the shofar in the city on Rosh ha-Shanah, but must go out into the field for that purpose. The sheiks of the place receive a portion of the booty secured by their subjects in their predatory expeditions; Penjur: About 30 families, whose members are mostly cotton-spinners; Rowandes: 50 to 60 families; Sacho: 200 persons; Seneh: An important commercial center. The Jewish community has two synagogues; Suleimania: 180 families. The men are mostly pedlers, small traders, and tailors.”

After WWI, some Iraqi Jews immigrated to the US, but that was not due to danger, but more for opportunity. In 1934 New York saw the formation of the “Iraqi Aid Society” a social service-Chesed organization formed to serve the Iraqi Jewish community that had moved here. Iraqi Jews do not see themselves fit into the general Sefardic spectrum and only recently has the community identified themselves with the other Sefardic groups in New York.

The Iraqi Jewish community began having issues in the late 1940’s. There are some who accuse Zionist agitators for having caused the unrest. Others claim Iraqi involvement in the Israeli war changed things. Be that as it may, in 1950, a bill introduced in Parliament allowed Jewish citizens exit visas so long as they renounced their Iraqi citizenship. Over 100,000 Jews exited within a few years. Many others pretended to convert while maintaining a semblance of Jewish tradition in hidden manner. All leaving were stripped of their assets.

In 1992 Kurdistan got its independence in the Northern region of Iraq.

Saadoun, in his article for Al-Monitor quotes a spokesperson for the KRG Ministry of Endowments and Religious Affairs, who said that it was already in April of this past year that the KRG parliament, “issued the Law of Minorities, which was unanimously approved before being signed by KRG President Massoud Barzani. This law confers to every religious community in the Kurdistan Region of Iraq the right to establish a representation office and practice its rituals freely.” The spokesperson estimated that there are 300 Jewish families currently in Kurdistan and that KRG welcomes those other Jews who would like to return to the region.

There is a caveat.  The Jews will not be allowed to be involved in politics at all. Iraqi government officials approve Kurdistan’s move, also with a caveat, telling Saadoun, “The opening of the representation office for Jews in the KRG is a good step, provided this office remains free from the influence of the State of Israel, since Iraq rejects any relations with that country” (as reported in Al-Monitor).  As for Iraq, they have not made a similar offer."
Posted by bataween at Friday, December 04, 2015