Sixty-eight years after she last saw her family, an 85-year-old, silver-haired, Jewish great-grandmother returned home to Haifa in northern Israel this week — having spent her entire adult life living as an Arab woman in  Syria. Moving report in the Times of Israel: 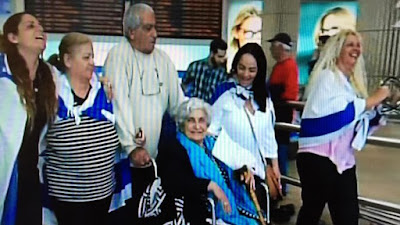 Rachel Elkayam, seated centre, is reunited at Ben Gurion airport with her long-lost Jewish family
Rachel Elkayam, the third of 10 children, was a 16-year-old girl living in the mixed Jewish-Arab city of Haifa in 1947 when her parents moved the family to Tel Aviv. Conflict between pre-state Israel and the Arab world was escalating, ahead of the following year’s declaration of Israeli independence and the full-scale war that then erupted, and the Elkayams believed they would be safer in the center of Israel than the north. But Rachel, a rebellious child, had fallen in love with one of her Arab neighbors, Fuad, and was pregnant with his child. “I loved him, and he loved me,” Rachel Elkayam told Israel’s Channel 2 news in a report on her remarkable life story, broadcast on Friday night.

Fuad’s family came to Tel Aviv to find her, and she went back to Haifa with them, and married her young love in a ceremony that she kept secret from her parents. In fact, from the day she disappeared in Tel Aviv, the family never knew what had befallen her, and always presumed that she was dead.

What actually happened was complicated, heart-wrenching, and almost defies belief. Not long after their secret marriage, Fuad was shot in the streets of Haifa by a sniper — “I never saw him again,” said Rachel — and he died in a local hospital. Her parents-in-law decided to flee Israel, for Syria, and insisted that she come with them; she was, after all, carrying their grandson in her womb. “I didn’t want to go,” Elkayam recalled tearfully, in the mixture of Arabic and halting Hebrew with which she spoke throughout the report.

Read article in full
Posted by bataween at Saturday, December 12, 2015