For the first time in some cases, elderly Jews born in Arab countries recalled their painful childhood memories in public. But as the event organiser Janet Dallal said :'out of the bitter comes the sweet.' The Arab world's loss is Israel's gain. Haaretz reports (with thanks:Maurice): 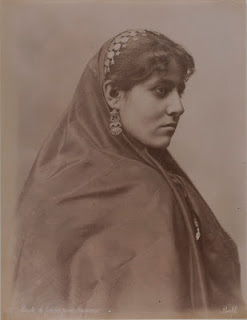 Syrian girl (Bonfils collection)
Gladys Cohen, 84, lit a memorial candle Sunday and dedicated it to two relatives who were arrested and imprisoned in the country of her birth, Iraq, many decades ago. “Shaul was an engineer. Ya’akov, his older brother, was a merchant. They took them to prison and ‘disappeared’ them. To this day, we don’t know what happened to them – nothing,” Cohen said.

She was attending a special ceremony at a seniors’ day center in southeast Tel Aviv, ahead of today’s memorial day that commemorates the expulsion and flight of close to one million Jews from Arab countries and Iran. The date, November 30, is the day after the UN resolution was passed in 1947 to partition Palestine, after which many Jewish communities had to flee their native countries.

The persecutions, murders and theft these Jews suffered began long before then, though. Iraqi Jews can’t forget the 1941 pogrom (or farhud – an ancient word that means “violent dispossession of the governed”). During the pogrom, which took place during the Shavuot of 1941, some 180 Jews were murdered by Arab rioters, another 2,000 injured and tens of thousands of others were robbed.

“Like all the Jews, we shut ourselves up in the house because we were afraid,” recalled Cohen. “I was 10 years old and asked what happened. They told me the Arabs had risen up against the Jews to hurt them, and all the Jews were running to hide.”

Speaking at the ceremony, she spared no details of the pogrom’s horrors, in which old people and infants were beaten to death.

Ten elderly women who had moved to Israel from Arab countries and Iran shared the stage at the day center yesterday. Each had a different life story, but all were shot through with suffering and pain.

Cohen was born in Baghdad in 1931, came from a wealthy family in the silk thread trade and studied at the prestigious Alliance school. “Then, in 1941, everything changed and the riots began against the Jews,” she recounted.

She recalled an Arab woman throwing a burning cigarette onto her dress, and a man ripping a gold necklace with a heart charm from around her neck. In 1947, the family decided to flee Iraq, leaving their many possessions behind. Cohen learned Hebrew at a secret club established by Jewish Agency emissaries. When the time was right, the family left in a minibus for Israel. “Today, I am proud to be part of a large Jewish family” she said, noting that she has six children, 19 grandchildren and 18 great-grandchildren.

The driving force behind the ceremony was social activist Janet Dallal, also from Iraq, who immigrated to Israel in 1975. “While our brethren, the Jews of Europe, were persecuted and slaughtered, hatred and incitement came to us in the Arab countries,” she said, adding, “Every community dealt with it differently but, ultimately, there was an ingathering of the exiles. I don’t know whether it was thanks to Hitler or [Grand Mufti of Jerusalem] Haj Amin al-Husseini, but out of the bitter came the sweet.”

Moriah Akiva, 79, also shared her memories at the ceremony. She was born in Baghdad and lived on the bank of the Tigris, where the Jewish community had coexisted peacefully with Muslims. “The Jews and Muslims ate and drank together,” recalled Akiva. Her father operated the projector in the Royale Movie Theater and owned a coat store in the Shorjh market.

The riots broke out when Akiva was 5 years old. She still remembers crossing the bridge over the river to bring her father lunch, as she did every day. Suddenly she saw people running in all directions, fleeing from Arabs who were beating them with sticks. “I found a stick like that on the ground and waved it like they did and started to run,” she said, sporting a childlike smile. An Arab friend of her father saw her and managed to get her out of there. She remembers the angry mob holding aloft the severed leg of a Jewish baby.

But she also remembers the Muslim neighbor who protected her family, a man whom she called “Hali” (uncle). He comforted her and calmed her, bringing her into his house so she wouldn’t witness any more of the horrors.

Next to her at the ceremony sat Janet Bracha, born in 1940 in Basra, southern Iraq. “Today we open the wounds,” Bracha said. When the riots started, Arabs burst into her father’s store and robbed the cash register and half the merchandise. “My father came home helpless. We were small, we didn’t know what had happened,” she said. Her memories also include the imprisonment and execution of the wealthy Iraqi-Jewish businessman Shafiq Ades, who was accused of selling weapons to Israel. Bracha’s uncle on her mother’s side was Ades’ business partner.

Bracha Bidani, sitting next to Janet Bracha, was born in 1939 in Bitha, Yemen. She remembered the wave of anti-Semitism during her childhood, when Jews were forced to clean the streets until late on Friday nights. “The men asked to be released to prepare for Shabbat. When the king [Imam Yahya] heard what the Arabs were doing to the Jews, he decided to free them. His daughter was sick and his cows got sick, and he was afraid of a decree from heaven,” she explained. The Jews were allowed to go to the mikveh (ritual bath) and from there to the synagogue “to pray and beg for salvation from the creator of the universe.”

In 1949, Bidani’s family collected their belongings and began wandering from village to village until they got on a truck to the coastal city of Aden. “Forty people were stuffed in there, and it was awful,” she recalled. “My father held the rolled parchment of a 100-year-old Torah scroll close to his heart, until he brought it safely to Israel.”

The family of Asher Hajaj, a community activist and one of the ceremony’s organizers, came from Tunis. Yesterday, Hajaj spoke about righting a historical wrong – last year was the first time the government had decided to officially mark the expulsion of Mizrahi Jews from their homelands. “Most of you were not able to tell your personal and family story to this day. As if the events of the Holocaust dwarfed the blood libels and riots that the Jews experienced in Arab countries and Iran,” he told the crowd.

“The state almost forgot the atrocities that forced the immigrants to flee for their lives – leaving their homes and property, but not their identities. Unfortunately, it seems their rich culture and folklore did not receive the exposure it deserved. But the authorities have come to their senses and begun to repair the injustice that was done. We must show an interest and allow the national narrative to honor the history of the entire people of Zion,” Hajaj concluded.