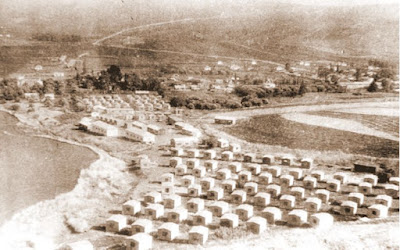 Huts in the refugee camp at Yavne, Israel.

30 November was Jewish Refugee Day. This year marked the second annual commemoration of the mass exodus of Jewish refugees from Arab countries and Iran, as  designated by a Knesset law passed in June 2014.

For Shayna Zamkanei writing in The Forward, however, the choice of 30 November – the day after the UNGA resolution 181 for the Partition of Palestine – is an unfortunate one. She charges that Israel usually follows days of mourning and blame  with days of hope and joy. For instance Holocaust Memorial Day and Remembrance Day for Israel’s fallen soldiers are followed by Israel Independence Day.

Not so in this case. The elation following the passing of the Partition Plan on Kaf-Tet Be’ November is followed by remembrance of the outbreak of violent anti-Jewish riots in several Arab countries.

These riots must not be glossed over – they are a watershed in the demise of the ancient, pre-Islamic Jewish communities of the Arab world. 30 November is not just an important date in Jewish history – but in the history of the Middle East.
The purpose of 30 November is not only to educate Israelis about the forced exodus of 850,000 Jews after 30 November 1947. This story has been crushed by the weight of the Holocaust. It has been expunged from the history books worldwide, not just in Israel – while ‘refugee’ has become synonymous with ‘Palestinian’.

The choice of 30 November is significant because it places the Jewish refugee issue in the framework of the Arab -Israeli conflict – which created two, not one set of refugees – and demands justice for the wrongs that were done to them.
The main problem with 30 November, I’ll concede, is that it reflects an Arab backlash to the ‘provocation’ of the Partition Plan. The Knesset could have chosen other dates: 17 February would have recalled the date in 1947 that the Arab League drafted a plan systematically to persecute their Jewish citizens before a single Arab refugee had fled what would become Israel.

This date would have demonstrated that the oppression of Jews in the Arab world was not simply an Arab reaction, but a premeditated strategy.

Another contender was the anniversary of the 1 June 1941 Farhud, in which  179 Jews were murdered in Iraq. This event clearly demonstrated that the Jews of Iraq were not victimised for being Zionists, but simply as Jews.

And why stop there?  Constantine 1934. Fez 1912. Shiraz 1910. Throughout 14 centuries Muslim majorities needed no pretext to turn on their defenceless  Jewish minorities. There are no stories of resistance to memorialise.
More controversially, Shayna argues that 30 November represents a failure of the original Zionist project. Huh?  The influx of 600,000 immigrants in the years immediately after the creation of Israel, doubling the resident Jewish population, represents a massive victory for Zionism. The descendants of these Mizrahi and Sephardi refugees now comprise more than half Israel’s Jewish population.

It is true that the Israeli government treated them as Zionists returning to their ancestral homeland and not as refugees.  Without a shadow of a doubt and according to the accepted UNHCR definition, these people were refugees fleeing the push factors of persecution and violence, and arriving in Israel with nought but the shirts on their backs. In Israel’s short history, it was ever thus – refugees from the Holocaust, refugees from the Soviet Union, refugees from Ethiopia, and not from the secure and comfortable West, have flocked to the Jewish state.

Yet there were also pull factors, drawing Jews to the mesmerising and exciting idea of building their own nation, and this mindset helped  them in their integration and re-settlement. Why not celebrate this miraculous achievement, too, on Jewish Refugee Day?

The establishment of Israel validates the Mizrahi experience. It is not the cause, but the solution to the antisemitism which Mizrahim and Sephardim suffered periodically throughout history.

A day of hope does indeed follow 30 November. It is called Israel Independence Day.

Read article in full
Posted by bataween at Sunday, December 13, 2015