Coming to the UK was hardly a dream 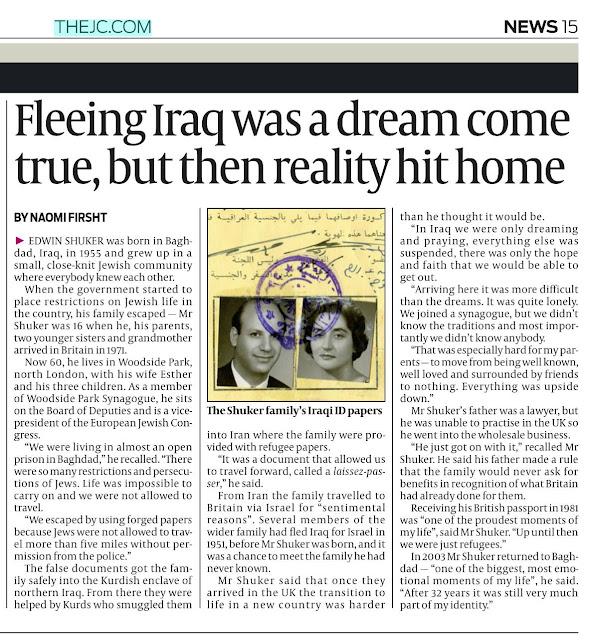 In this profile timed to appear in the week of the 30th November commemoration of Jewish refugees from Arab lands, Edwin Shuker tells Naomi Firsht of the Jewish Chronicle that arriving in the UK as a refugee was more difficult than he had dreamt when trapped in Iraq.

Edwin Shuker was born in Baghdad, Iraq, in 1955 and grew up in a small, close-knit Jewish community where everybody knew each other.
When the government started to place restrictions on Jewish life in the country, his family escaped - Mr Shuker was 16 when he, his parents, two younger sisters and grandmother arrived in Britain in 1971.

Now 60, he lives in Woodside Park, north London, with his wife Esther and his three children. As a member of Woodside Park Synagogue, he sits on the Board of Deputies and is a vice-president of the European Jewish Congress.
"We were living in almost an open prison in Baghdad," he recalled. "There were so many restrictions and persecutions of Jews. Life was impossible to carry on and we were not allowed to travel.


More about Edwin Shuker
Posted by bataween at Saturday, December 05, 2015

off topic// the last Jews in Egypt from Now Lebanon

off topic//Ben Dror Yemini on meager coverage of commemoration of exodus of Jews from Arab countries vs massive coverate of palestinian Arab "nakba"
http://www.ynetnews.com/articles/0,7340,L-4734742,00.html

I've read about him before I knew it was him and recall that I've briefly met him before. How interesting