Halabi film-maker to focus on Codex

An Israeli of Syrian origin is planning a documentary film to reveal new information behind the disappearance of the Aleppo Codex, the oldest and most valuable Bible in the world. It will portray the glory days of the Aleppo Jewish community, largely destroyed in 1947. 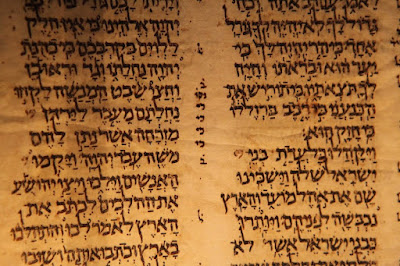 A fragment of the Aleppo Codex, now in Jerusalem (Photo: Irene Pshedezki)

The Aleppo Codex (a.k.a the Crown or Keter) was kept for centuries in the great synagogue of Aleppo, Syria. A third of it disappeared on its way from Syria to Israel, while the rest is kept at the Shrine of the Book in Jerusalem.

The circumstances leading to the disappearance of the missing pages, as well as the claim of ownership or the appropriation of the Crown by the state of Israel, have remained open questions.

New testimonials reveal a story that was never told about the disappearance of the crown and about the identity of its holders.

The film, named “The Lost Crown”, will uncover the true story of the disappearance of the Crown and will tell the story of the Aleppo community in its days of  glory.

The director, Avi Dabach, is an Israeli filmmaker and the great- grandson of Ezra Dabach, the caretaker of the great synagogue in Aleppo.

For the last five years, Avi has been researching the Halabi (Aleppan) community of Syria. Now, he says, is the time to take this project one step forward from the research stages to production: “Since I have begun to take an interest in the story of the Crown, I have been finding new details, some surprising and some disturbing. It appears that the official account is not necessarily true, and certainly not the whole truth. I invite people to join the journey to the Aleppo communities, spread around the world. Together we will reveal some of the secrets surrounding the Crown, and tell the secret this unique, stubborn community, of which I am proud to be part of”.

The story of the missing pages was the focus of a book by Matti Friedman. How will the film be different? "I have read Mati's excellent book, but my point of view is different," says Avi Dabach.

"I'm acting as a member of the Halabi community, and I put much emphasis on the remaining parts of the Aleppo Codex, held in the Israel Museum, not only the missing pages."

The film makers are looking for crowd-funding to finance 'The Lost Crown'. For details click here.

Hebrew Manuscripts from Syria go on display
Posted by bataween at Wednesday, December 16, 2015