Every so often the peerless blogger Elder of Ziyon digs up some nuggets of history about Jews in Arab countries. Here are some letters that were included in the 1880-81 Executive Documents of the House of Representatives, Foreign Relations, Volume 1. Noteworthy in this distressing story is that a western passport immediately confers immunity from punishment, but that the collective of Moroccan Jews, who don't have that luxury, are helpless in the face of threats from the Muslim populace. Also of note is that the authorities try to fob the victim's family off with blood money. (With thanks: Yoel) 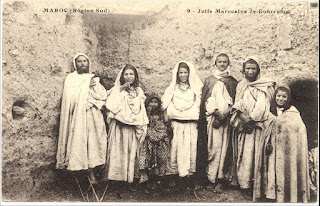 "Dear Sir: I regret to state that a sad affair took place at this city just on my arrival, and I now beg to give an account as related to me by an eye-witness, and which has been corroborated by many respectable Moors and Jews during this day, which is as follows:

An Algerine Jew, strongly under the influence of liquor, walking near the Sultan's residence at the city of Fez, met a Moor with a woman; the Jew made an attempt to take the woman with him; the Moor retaliated by striking him; the Jew then drew a pistol and fired it off, not injuring any one; he was then set upon by a number of passers-by and severely beaten and taken off to prison; soon after, three Jews were passing by the Sultan's residence, when they were suddenly surprised by a party of Moors in a most violent manner; two of the Jews being young and strong made good their escape, but the victim, some eighty-five years old, was stopped; he inquired why ho was to be dealt with in this foul manner, assuring them that he was not aware he had committed any wrong; when they told him they wanted to show him about that, and immediately threw him down, saturated his clothes with petroleum, set fire to him, and there and then he was burned to death. A Moor of a most respectable appearance to-day informed me that he was an eye-witness to this operation.

Since which the authorities have asked the Jews to let the matter pass, offering $400 to the family of the deceased, and say no more about the affair. The Sultan liberated the French Jew who, during his state of intoxication, fired the pistol, without inflicting upon him any punishment whatever. After this affair the Jews all remained in their houses four days with barred doors, not daring to show their faces outside, under a terrible state of excitement, fearing death was to be dealt out to them all in the same cruel manner; but now they go out unmolested, otherwise than by occasional threats from Moors that soon the day will come when they will all share the fate of the aged victim.

From the Melah, where the Jews are quartered, to the house where I now reside, as you know, is a long walk, and many of them have come to lay their complaints before me, and, although the weather is cold for this country, the streets muddy, and very toughly paved, they all, rich and poor, male and female, come barefooted, assuring me that they would be murdered if they attempted to walk the streets of Fez otherwise; - which is truly a barbarously cruel state of affairs and should be noticed by the more civilized governments, and a matter which I believe could most easily be remedied."

Read article in full
Posted by bataween at Friday, December 11, 2015

I have read this piece from ELDER’s blog last week. I usually do not comment in his blog. The entry piece is however very important, not for the usual description of the humiliating plight of Jews in Morocco as dhimmis as well as their constant fear to being attacked and their wives and daughters defiled, but for its description of how powerful and revered Muslim religious political leaders spread lies and propaganda against the Jews. One usually does not associate Jew-hatred in Arab lands of old with rational written accounts or manifestos of anti-semitism in the same way as those found in Christian Europe culminating in modernist Nazi propaganda.

The letter written by the vizier to Feliz Mathews of US interests in Tangier amply shows how the spread of lies are used in order to deceive foreigners notables. I knows that Arab culture is overwhelmingly an oral culture that relies on passing information from generation to the next, due mostly to very low level of literacy, but yet countless letters, essays (and not mentioning the usual fatwas) were written by very famed and respected Muslim jurists whose sole purpose to create libels and misrepresentations to break the back of Jewish subjects and make their lives miserable.

One that stands the test of time is the case of Abd Karim Al-Maghili who lived in 14century, who for some reasons had an extreme hatred of Jews responsible of the trans-saharien commerce and their Oasis of Touat (now in Algeria). If one has the possibility to read the primary sources (French translated) one would be amazed at the virulent language reserved for the Jews of Touat, language coated with intense deceits of Maliki jurisprudence regarding the interpretation of the hadiths left by the prophet of Islam.

Yet to see the letter written by the king’s vizier to Felix Matthews, spreading lies and deceits about the incident in Fez shows yet again how the Kingly court bureaucrats lie by suggesting that the Arab (moor) died and his wife receive no compensation. “A weapon carrying Jew kills an Arab”. The sentence cannot even be understood let alone possible with the overarching Dhimmitude of the times. The sentence carries with it two major offences; carrying a weapon and god forbid killing an Arab. The absurdity of the story is overwhelming. The weapon carrying Jew is not mentioned in the vizier’s letter, yet stressed in the letter of Mr. Cobb to Mr. Matthew. This goes to show that even Mr. Cobb is gullible to apologetic Arab eyewitness as he said “corroborated” by “respectable” Moors.

By the way, the picture of the post, is it a picture of Jews of Gourrama Middle Atlas montains Southwest of Fez?

Hi Sammish - as ever your knowledge and insights much appreciated. You are right, the photo is of Jews in Gourrama.
It just so happens that Al-Maghili came up in a recent lecture bo Paul Fenton - a report will be posted here soon.