The 37th World Zionist Congress, held in Jerusalem on 20 - 22 October 2015, has passed a resolution calling for all countries to recognise human rights violations against Jewish refugees from Arab lands and their right to compensation for seized property.

The resolution was proposed by Justice for Jews from Arab Countries (JJAC) President Elie Abadie through the Likud International, supported by MK Oron Hazan, Chairman of the Knesset Lobby for the Restitution of Jewish Refugees Property.


Among those advocating for the issue at the Congress were Mrs Levana Zamir, chairman of the  umbrella organisation representing Jews from Arab Countries in Israel, Meir Kahlon, representing the Israeli Sephardi Federation, and Mrs Esti Abadie.

Levana Zamir hailed the resolution as a 'big step forward.' She claimed that the issue of justice for Jewish refugees from Arab lands was unknown to most delegates to the WZC.

She added: "It is now a must to establish an International Fund to compensate both the Jewish Refugees and the Palestinian Refugees, stopping the Palestinian claim for a Right of Return."

The resolution breaks new ground by demanding that every international forum discussing human rights, as well as accords between Arabs and Jews,  should give 'precedence' to 'this distressing international issue': the human rights violations of Jewish refugees from Arab lands. 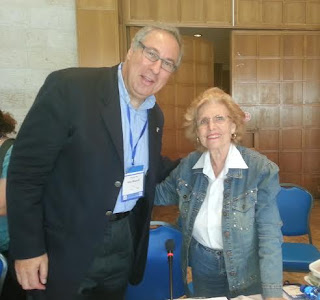 Here is the full text of the WZC resolution:

5. The Restitution of Jewish Refugees’ Property


.    " Whereas 850,000 Jews were expelled by force and with cruelty, and uprooted from their homesin Arab lands, North Africa and the Persian Gulf, and dispossessed of their property, which wasstolen from them; and


.     Whereas the question of the expulsion of Jews has been neglected and ignored for decades, in   Israel and around the world, and as a result of which the issue of the rights and compensation of   hundreds of thousands of Jewish refugees from Arab lands and North Africa has also been    neglected and ignored; and


.    Whereas at every international dialogue about human rights and agreement between Arabs and   Jews it is imperative to assign precedence to this distressing international issue, viz., of human  rights’ violations against Jewish refugees from Arab countries,
"The Congress calls upon the Zionist Executive to appeal to all countries in the world to support a historic resolution adopted by the US Congress in April 2008. It recognizes the rights of Jewish refugees from Arab lands and North Africa, and emphasizes concern over: human rights’ violations, expulsion by force, dispossession and property confiscation of Jews who were uprooted from their homes.