The Yemenite baby conspiracy lives on

The mystery of the disappeared Yemenite babies in the chaotic first years of the Israeli state won't die - although three investigative commissions have found no evidence that the babies were deliberately taken from their families for adoption. Eeta Prince-Gibson reports for The Tablet: 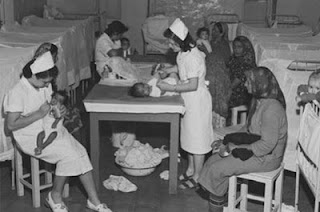 Reluctantly, Salame Ozeri opens the door to her small apartment in the back of a plain stucco building in Hadar Yosef, a working-class community in Tel Aviv. “What’s the point in talking? It won’t bring him back, will it?” she says.

She sits down at the large dining room table that takes up much of the living space. The heat is oppressive, and she frequently wipes the sweat, and the occasional tear, from her dark, heavily lined face. Once she starts to speak, the words come quickly. Now nearly 79 years old, her Hebrew is not fluent, and she fills in the words she doesn’t know in Yemenite-inflected Arabic.

“I had my first baby when I was 13, in Yemen,” Ozeri says. “And I was pregnant when I came to Israel in 1949. We lived in tents, in the cold, in the rain. I gave birth to my baby in the tent, and a few days later they came and took me to the hospital. They threw me on a bed in the corridor. I didn’t know Hebrew, I had to beg for water. I was still bleeding.

“They let me nurse my baby, then they took him away, and said they’d take care of him. Then they told me to go home. I said, ‘I’ll go home, but give me my baby.’ They said the baby shouldn’t be in a tent in the winter, and they would take care of him.

“But then the days passed and it was time for his brit. So, we went back and they told me he was gone. Gone? What does gone mean? I told them that I came from Yemen with him in my tummy and I wouldn’t leave without him. … Then they told me they’d already given him a brit, because they thought I wouldn’t come back. They named him Ben-Ami”—son of my people. “But he wasn’t the son of the people—he was my son!”

Ozeri snatched Ben-Ami back and fled back to her tent. Ben-Ami grew up, she says, to be “a wonderful man.” He died of liver disease when he was 40.
But the child they named Abraham, born six years later, also disappeared, and was never returned.

Read article in full
Posted by bataween at Tuesday, November 24, 2015

Does this mean that the Yemenite baby abduction did not happen and that it was all a figment of imagination? Or is it that it was not deliberate but a pure accident that hundreds of them disappeared?

There were three commissions of inquiry. In the end they could not trace what happened to 56 children, so we are not talking about thousands.
This was not something that happened only in Israel, it also happened in France, see last story:
http://jewishrefugees.blogspot.co.uk/2013/04/desperately-seeking-mum-and-dad.html

"Five additional missing babies were found to be alive." Alive when? Strange that no one has come forward, especially with the publicity surrounding this. And would not an Ashkenazi couple with a Yemeni child look a little "out of the ordinary"?

Wooooow post !It is a really good post ! I would remove the wheel, hut and don't give large things to chew. Large items can crush or suffocate the babies and you don't want anything to distract the mother and father from taking care of the babies. Occasionally give a small toilet paper tube for the parents to chew, but that's it.
Thanks:)