Erdogan victory 'no threat to Jews' 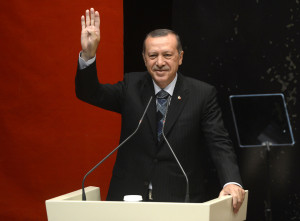 The stunning victory of the conservative Justice and Development Party (AKP) in Turkey does not pose a threat to Turkish Jewry, Turkish-Jewish columnist and blogger Karel Valansi told The Algemeiner on Thursday.

Valansi, the political columnist for the Turkish-Jewish weekly, Şalom, said the “public voted for security and against the instability that is perceived with governments formed by coalition.”

After a general election last June produced a hung parliament, this week’s landslide AKP victory handed President Recep Tayyip Erdogan and Prime Minister Ahmet Davutoglu’s party the option of retaining single-party rule.
Valansi said many Turks believe the country is better off with one-party rule, which she assessed would end up being the case. She said the recent climate of terrorist attacks that proceeded the vote, such as the twin bombings in Ankara this month, as well as an “aggressive nationalist campaign,” were probably behind AKP’s strong standing in the polls.

The campaign was so nationally focused that it “excluded the Jews,” said Valansi. “There was no word on Israel, or Jews as a threat or lobby that want to harm Turkey,” as there have been from AKP officials in the past, she said.
Valansi said she thought Turkish-Israeli relations could benefit from a single-party government as well as the absence of a powerful opposition. Relations between Israel and Turkey have snagged under AKP and its charismatic leader, Erdogan, who has served both as prime minister and now as president.

AKP has warm relations with the terrorist group Hamas, and its leaders have been harshly critical of Israeli policy vis-a-vis the Palestinians. In August, Erdogan met with Hamas leader Khaled Mashaal.
Other analysts do not share Valansi’s optimism about Turkish-Israeli relations. Semi Idhiz, an analyst writing in the Washington-based Middle East website Al-Monitor, wrote, “It is generally believed that prospects for improved relations with Israel are also close to nil.”

Article in the Jerusalem Post
Posted by bataween at Wednesday, November 11, 2015

Erdogan's victory, which has already been described as the result of heavy suppression of the media, is a threat to Turkey generally and not likely to make life any better for the few thousand Jews remaining in Turkey.