Of all the articles dealing with the Netanyahu-Mufti controversy, this one by Melanie Phillips in the Jerusalem Post is possibly the best.  She explains that Netanyahu was fundamentally right:   it is thanks to the Mufti's intervention, that mass murder became genocide. 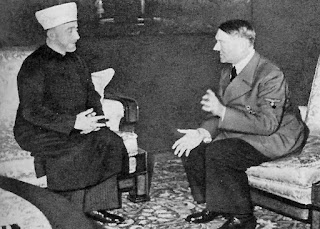 
When Prime Minister Benjamin Netanyahu spoke about the role played in the Holocaust by the Grand Mufti of Jerusalem, Haj Amin al-Husseini, he cannot have imagined the reaction he would detonate.

What he said was this: “He [Husseini] flew to Berlin. Hitler didn’t want to exterminate the Jews at the time; he wanted to expel the Jews. And Haj Amin al-Husseini went to Hitler and said, ‘If you expel them, they’ll all come here.’ ‘So what should I do with them?’ he [Hitler] asked.

He [Husseini] said, ‘Burn them.’” In the subsequent global firestorm, Netanyahu was denounced for exonerating Hitler. It was said he had claimed the mufti had given Hitler the idea of exterminating the Jews when the two met in November 1941; that he was cynically trying to tarnish today’s Palestinians; even that he was a Holocaust denier.

His subsequent protest that he had no intention of absolving Hitler of responsibility fell on deaf ears. Even those who acknowledged that the mufti had allied with the Nazis insisted Netanyahu had turned history back to front.
Most of this reaction, however, is at best wide of the mark and at worst quite obscene. For Netanyahu was fundamentally correct.

There can be no doubt he spoke too loosely. He has provided no source for the words he quoted from both Husseini and Hitler at that November 1941 meeting. And he should have acknowledged that the mass murder of European Jews was already well under way, and that Hitler had talked about exterminating the Jews since the 1920s.

But mass murder is not the same as genocide. And the precise moment when Hitler decided to exterminate the whole of European Jewry – the “Final Solution” – has long been disputed by historians.

For even while the Nazis were rounding up Jews for slaughter they were also deporting them – more than 500,000 between 1933 and 1941. And recently unearthed documentary evidence suggests that the mufti and Hitler egged each other on in a mutual genocidal frenzy.

A book published last year, Nazis, Islamists, and the Making of the Modern Middle East, by Barry Rubin and Wolfgang Schwanitz, argues that the mufti’s alliance with Hitler turned the extermination of the whole of European Jewry into a strategic imperative.

As late as July 1941, according to Hermann Göring, Hitler thought the last of the Jews could be removed from Germany by “emigration or evacuation.”
The authors write: “Yet since other countries refused to take many or any Jewish refugees, Palestine was the only possible refuge, as designated by the League of Nations in 1922. If that last safe haven was closed, mass murder would be Hitler’s only alternative.”

Rubin and Schwanitz make clear that the November 1941 meeting between Hitler and Husseini merely continued a dialogue that had started earlier that year about the mufti’s opposition to Hitler’s deportation of European Jews.
“In February 1941, Hitler had received al-Husaini’s proposal for an alliance of which one condition – paragraph seven – was that Germany stop Jewish emigration from Europe. After Hitler promised al-Husaini on March 11 to do so, Germany’s expulsion of the Jews was impossible and only mass murder remained.

“... After agreeing in early June to meet al-Husaini to discuss the issue, Hitler ordered SS leader Reinhard Heydrich on July 31, 1941 to prepare an ‘overall solution for the Jewish question in Europe.’ On October 31, he ended the legal emigration of Jews from German-ruled areas.

But the specific final decision had not yet been taken.”

On November 28, Hitler met the mufti in Berlin. “Behind closed doors, Hitler promised al-Husaini that Arab aspirations would be fulfilled. Once ‘we win’ the battle against world Jewry, Hitler said, Germany would eliminate the Jews in the Middle East, too.” The following day, “he ordered Heydrich to organise a conference within ten days to prepare ‘the final solution of the Jewish question.’” As the book also shows, the mufti was making common cause with Hitler long before 1941. By 1936, he was courting the Nazis for arms and money. In 1940, he sent Hitler a nine-page letter detailing a proposed alliance. The Palestine question, he said, united them in their joint hatred of the British and the Jews. He proposed to make Syria, Lebanon, Palestine and Transjordan a single federated state with a Nazi-style system. In return, he wanted Hitler’s help to wipe out all Jews in the Middle East.

Evidence that the mufti played a key role in the Holocaust was provided at the Nuremberg Tribunal by Eichmann’s close associate in the extermination program, Dieter Wisliceny. He said: “The mufti was one of the instigators of the systematic extermination of European Jewry and was a partner and adviser to Eichmann and Hitler for carrying out this plan.”

This was corroborated at the tribunal by two witnesses, Andrej Steiner and Rudolf Kasztner, who confirmed that Wisliceny had talked about Husseini in these terms during the war.