Yemen’s remaining Jews have been given the stark choice between converting to Islam and fleeing the country, Israel's acting Regional Cooperation Minister Ayoub Kara announced today. Kara, a Druze, has been asked to 'take care of this', according to the Jerusalem Post. It is a mystery why Yemen's Jews, who number less than 200 and are caught up in a civil war, have to-date stubbornly resisted attempts to get them out. (With thanks: Sarah) 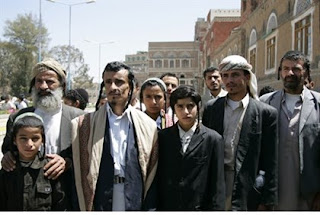 According to the Druze lawmaker, who maintains ties with contacts across the Arab world, a representative of Yemen’s small Jewish community informed him of an ultimatum from Houthi rebels currently in control of large swathes of the country.

The Jews were told to “convert or leave the state,” Kara told the Jerusalem Post, adding that the unnamed Jewish representative “requested that I take care of this.”

Yemen boasted a Jewish population of more than 50,000 during the mid-20th century; there are now fewer than 100 Jews in the capital, with another community of similar size in the northern town of Raida. The majority of the country’s Jews immigrated to Israel shortly after the establishment of the state of Israel.

After the Houthi rebels entered the capital last year, supporters gathered in the streets, some chanting “Death to America! Death to the Jews! Victory to Islam.” The Houthi logo features the phrases “Death to Israel” and “Damn the Jews.”
They “want to leave there fast. We need to act fast to get them out and we will do that, God willing,” Kara continued. “The whole world ought to know that there is a problem with the Houthis.”

According to Kara, the Jews of Yemen are very critical of the Jewish Agency and its efforts on their behalf and he will be working to arrange meetings between the Jewish representative and agency chairman Natan Sharansky, Immigrant Absorption Minister Ze’ev Elkin and Prime Minister Benjamin Netanyahu.

“There are some things that cannot be discussed publicly, for obvious reasons. The Jewish Agency has long been involved in efforts to rescue the remaining Jews in Yemen and has often gone well beyond the call of duty to facilitate a way out for those who wish to leave, even in times of civil war and strife. We are not at liberty to comment further at this time," a senior Jewish Agency official told the Post.

Asked to comment, a spokesman for the Foreign Minister told the Post that he would not comment as the issue because it is “very delicate and peoples lives are at stake.”