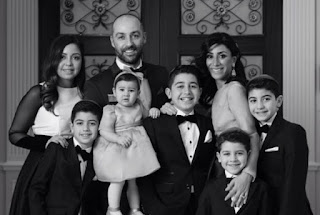 Steve Maman and his family: saving children is Tikkun Olam and Kiddush Hashem

In this interview with Moroccan World News the Moroccan-Jewish Canadian benefactor Steve Maman reveals that his partner in saving Christians and Yazidis from Da'esh (Islamic State) is Canon Andrew White. Point of No Return followers will be familiar with Canon White's devotion to the protection of Jews and their heritage in Iraq - before his stint as Vicar of St George's Church, Baghdad became too risky and he was relocated to Jerusalem. Maman's quid-pro-quo for the publicity is to pay tribute to Morocco as an 'example of tolerance to the world'.

Could you tell us about your foundation in few words and the choice of Yazidis and Christians?
Steve Maman: On June 26, 2015 I created a nonprofit organization called “The liberation of Christian and Yazidi children of Iraq (CYCI)” to support my mission.  Its goal is to negotiate the liberation of children held hostage and used a sex slaves in Mosul. We chose Christians and Yazidi because they are the ones held hostage after a fatwa authorized them to be used and sold as sex slaves for the benefit of ISIS (Daesh) combatants. I would have definitely added the Muslim children to my mission if they were part of this horror.

Does your foundation have other objectives?
Steve Maman: Our unique objective is to liberate as many children as possible. The project has been going on for 8 months now, and the role of this organization is to provide us, in our work, with donations. Until now, I had carried the project on my own and have moved multiple families out of harm’s way.

What made you come up with the idea for this project?
Steve Maman: Well, I as a Moroccan Jew, I found this cause to engage in a true world responsibility. The Torah talks about two things: “Tikkun Olam,” repairing the world, and “Kiddouch Hashem,” to make God’s presence respected.  As a Jew, it was a way to make this world better through actions of goodness and kindness. The goal here is for children to come out alive from this horrible war.

There is no question of religion, race, or nationality being discussed here. There are innocent children that are powerless, caught in the crossfire. But worse, they are being exploited in the crossfire, as if that alone were not enough pain to endure. The exploitations are beyond understanding.  Children beheaded, raped, beat, underfed, left to live in cages!  Why? Because they are Christian or Yazidi, and therefore this does not constitute a sin in the eyes of Islamic law in the way ISIS interprets it.  This is not Islam. I refuse to accept, as a Jew, that this is Islam. This is a deformation, a distortion of Islam. This has to be decried and it has to be fixed. The fixing starts with giving them a chance at life.

I need support. One year has gone by and it has been long enough for world leaders to react and plan a solution, yet we see little being done for those left behind at the mercy of ISIS.

The heroic Government of Canada, with its Prime Minister Stephen Harper,who has gone to Iraq and pledged nearly 140 million dollars in aid to the humanitarian cause, as well as sending Canadian troops, is sending a message to the world. I wish to see more world leaders unite forces in order to find a solution to end this.
May god bless my mission with world leaders being aware of what I do and of what can be done. My mission is centered on the ones who are held hostage. I refer tothe ones kept in cages being hurt, abused molested and raped. The ones I truly wish to help are praying to God after every rape that he ends their pain and humiliation. It is reported they wish they be killed rather than live with such a fate.

God give them the strength to hold on to life for a bit longer until I get to them, God willing.

How much is the amount you have collected until now?
Steve Maman: This is a question that I cannot answer and won’t disclose. But things are moving very well. Jews have been incredibly supportive of the mission, the majority being Moroccan Jews.

How long do you expect this project to last?
Steve Maman: One year maximum is my estimate. I figured that Mosul will be taken back and carnage will befall these children if they are not freed prior.

Does it have supporters and other funders? If so, who are they?
Steve Maman: Yes, until now, I have been funding the project myself. I founded CYCI in order to raise funds.  Jews can relate to this cause,since they lived a similar fate during the Holocaust at the hands of the Nazis. They can relate to what it is to be saved and liberated, therefore granted freedom. I cite Oskar Schindler or Sir Winton as examples. They inspired me to act and do what I am currently doing, but I am definitely a long way from attaining their results.

Which means of communication did you use to approach donors?
Steve Maman: We use Facebook to create awareness.

Are there well known personalities (in Morocco, perhaps) who support this project?

Steve Maman: From Morocco, nothing yet, but God willing my country shall surprise me.
The most important aid I currently have is Canon Andrew White. He is a world-respected humanitarian figure, with many world leaders openly supporting his foundation that assists refugees and the persecuted.

How did you get in touch with him?
Steve Maman: I met Canon Andrew White through Facebook. We became very close. He actually travelled to Montreal and stayed with us. We planned this mission. I was already involved with him 8 months ago when I saved two complete families and moved them to Ankara,amongst numerous other missions. I am currently renting them a house and providingfor all their needs in Ankara. Canon White admired my actions, as he knew the family well. This strengthened our bond.

How did Canon Andrew White help in your work?
Steve Maman: He is instrumental to my success. He has a platform in Kurdistan and in Jordan with camps for handling the children I liberate.

Have you made concrete achievements together?
Steve Maman: Together we have saved more than 102 children so far, and it increases every day. Canon Andrew White has nothing to do with the liberation aspect. He handles and provides support after they are liberated.

Do you have any facilities for rescuing children? Do you make any negotiations there?
Steve Maman: I will explain it this way: I have, on the ground in Iraq, someone I call a brother. He is an Iraqi Christian. He is my hero. He is a young soldier, decorated by the US army and by the Iraqi Government. He is connected to every possible figure inIraq (Sunni, Shiite and Kurd, as well as all factions).

There are some people that seek means to make money around this war. I exploit that to my advantage. Tribal leaders are very helpful.
We never meet ISIS. We never negotiate with ISIS.

For the first time a Canadian Sephardic delegation was formed to be given, as Radio Shalom journalist Charles Lugassy says, its “title of nobility”. In what context was your meeting with the government and its leader organized? For what reason did you meet the Prime Minister? Do you have concrete political support?

Steve Maman: Well, the agenda of the day was specifically to honor Sephardic Jews that are influential.
The delegation was made up of people that make a difference in our world, by Sephardic Jews of all origins. I was chosen for my involvement in this project and mission. It was part of a group of 27 people from Canada.

I met the politicians in a context where the first delegation of Sephardic Jews was invited to Ottawa in a historical context (Purim day). We were greeted witha lunch, a tour, and exchanges with ministers while the Prime Minister was reserved for a select 7 people.

Has the constitution of this delegation been helpful for example in the fight you lead to rescue child victims of ISIS?

Steve Maman: Not at all. There was no relation with the agenda of that day.

You give in your video on YouTube the example of the Jordanian pilot. What was its impact on your project?

Steve Maman: Yes, this moved me very deeply. I wanted to act and not remain a spectator. I basically looked at my watch, and noticed how many lives I could save if I were to sell what was on my wrist. The next morning, I decided I would help children out, using my contacts in Iraq.

What message do you want to send to the world?
Steve Maman: This project is directed by a Moroccan Jew that was born in a country where there is tolerance for all religions that permits them to express themselves openly.

Morocco should serve as an example to the world. I could be more proud to be born to such country. My Moroccan identity is what makes me who I am, someone who cares, who loves and gives to strangers. This character is typical of Moroccans. We are definitely givers. The land inspired us with love for others. The land made us who we are: in my case, a Moroccan Jew with an attachment to my land that is irreproachable. This is proven again through the generosity of Moroccan Jews who are clearly standing with me in my fight to save and liberate these innocent girls and women.