Tisha' b 'Ab with the Jews of Aden

This is  an  Ashkenazi traveller's account of his visit to  the main synagogue in Aden in the 1950s (courtesy of JJAC) during the 9th of Ab, which falls this Saturday ( but is postponed till Sunday).  This is the saddest festival in the Jewish calendar, mourning the destruction of the two Jewish temples in Jerusalem and other disasters in Jewish history. 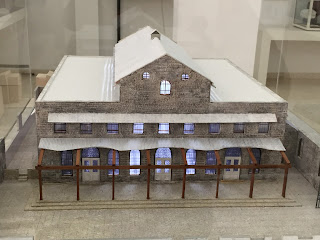 Model of the synagogue in Crater, Aden

"At night, a scene right out of the Arabian Nights meets me in the synagogue for the Tisha B'Av services. The men wear red fezzes, are dressed in white, flowing robes, and are followed by their sons and grandsons. Clusters of these families place themselves comfortably in various spots of the synagogue. The grandfather, patriarchally placed in the middle, sits on a carpet, sometimes barefoot, resting against a high cushion or box; next to him his son, also a little on the heavy side, but without the elder's flowing white beard and side curls.

Around the group are children, usually barefoot, of all ages, of whom the youngest will soon fall asleep while the older ones compete with the grownups in chanting the Kinot. With the synagogue built for a community of thousands, only a few hundred are left; the enormous spaciousness of the basilica-type synagogue leaves room for approximately fifty adults and an equal number of children to disappear into their respective corners.

"For the youngsters, it is like Purim or Simchat Torah. Happy groups of boys in holiday dress, barefoot, with Israeli-made skullcaps on their heads, run back and forth. Then a stern looking young man with a red fez and black beard lets his rod out through the air with a whistling sound, but miraculously misses the children each time he charges into the groups. For a while he gets them to congregate at the foot of the Ark and even gets them to chant a few lines, but soon they are dispersed again in mirth, to the charging of the melamed. 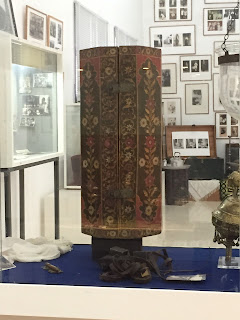 "Behind the bars along the east wing, women are following the services in a darkened hall. I noticed that their faces are uncovered, although their heads are covered by kerchiefs. Surrounded by Moslems whose married women are literally mummified from head to toe, it must have required enormous strength of character on the part of the Jews not to force their women into adopting similar garb.

"As the reading of the Lamentations proceeds, I am struck by the peculiar Yemenite pronunciation applied. Each komatz is pronounced as an 'o' and eachcholem is pronounced—similar to the Lithuanian manner—as an 'ay.' (A typical Oriental differentiation between the aleph and ayin, between kof and qof, between the 'hard' and 'soft' sounds, is observed. This mixture of Oriental consonants and 'Lithuanian' vowels creates a rather weird-sounding Hebrew.)

"After the services, as a group of worshippers gathers around me for conversation, I query them about this. They reply that their forefathers have lived in Aden for over two thousand years and that they have no other pronunciation.

When I asked them why their cemetery as well as their synagogue faces north and not east, they shake their heads in wonderment, since they have never heard of another direction other than north for praying and burying their dead. After all, Aden is practically due south of Israel. I am informed about their institutions, their yeshivot for boys up to the age of fifteen, their shechitah. I meet their rabbi, Rav Zecharyahu, a venerable sage with a long white beard and wise, knowing eyes. I hear complaints about the unhappy lot of the approximately one thousand Jews still living in neighboring Yemen, whose king refuses them the right to emigrate."

Tunisian memories of the 9th of Av

Oops! This year, Sunday is the 10th of Av. The Tisha B'av fast is pushed off from Shabbat to Sunday.
--malca

To was theological, the day mourns past, present and future events until when Messianic times transforms the day into a joyous holiday.
--malca