The Jewish lotus-eaters of Alexandria

A novel by Yitzhak Gormezano Goren harks back to the paradise of cosmopolitan Alexandria, where Jews raced horses, gambled and hopped from cafe to cafe. Review by Gerald Sorin in Haaretz (with thanks: Lily): 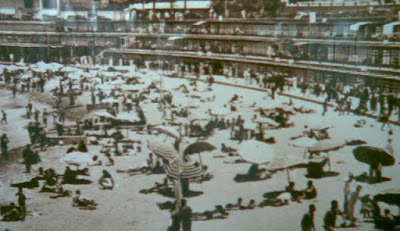 In the late 1970s, when Yitzhak Gormezano Goren was working on “Alexandrian Summer,” his first novel, he was young and daring enough to omit allusions to the Holocaust, Palestine and the kibbutz – themes that suffused the novels of great Israeli writers including A. B. Yehoshua, Amos Oz and Aharon Appelfeld. He did not refuse to engage with these prevailing literary motifs or “Zionist questions,” as he has recently called them; he simply chose to write about the world in which he spent the first 10 years of his life – the opulent and glamorous Egyptian city of Alexandria.

By using alternating points of view Goren delivers an arresting story shaped by the same individual, during two periods in his life, 20 years apart. We see, and, through the author’s narrative magic, almost hear the voice of Robby, a 10-year-old boy growing up in an insular, illusory cocoon of upper-middle class Sephardic Jews, and the reminiscences and reflections of Robby as an adult.
Some critics have incorrectly labeled “Alexandrian Summer” as fictionalized autobiography. The novel is certainly self-referential in that the author, like Robby, grew up in Alexandria in a well-to-do family, which – also like Robby’s – fled Egypt in 1951 to transplant itself in Israel. But there is much more in this story that is the product of the author’s imagination.

Readers will be quickly drawn into a city the author describes in lush, voluptuous terms as a “paradise by the sea” where sensuality is pervasive. One could argue that Alexandria itself – and not a thinly disguised Goren, or Robby – is the essential character of this book. Though a boy of sweetly attractive innocence, Robby is simply not the most important figure in the story. The Sephardic Hamdi-Ali clan, including two sons and a daughter, is for the most part the focus of Goren’s rich invention. They, along with Robby’s parents, Salem, an Arab servant, and several gossipy neighbors provide the narrative and the meaning of “Alexandrian Summer.”

We meet the Hamdi-Ali family in 1951 as new summer tenants in Robby’s parents’ spacious house, walking distance from the beach. Joseph Hamdi-Ali, handsome and patriarchal, is a respected famous former jockey. His name and Turkish background, however, are a matter of both wonder and doubt in the minds of other cosmopolitan Jewish vacationers from Cairo, who converse in French, Italian, Spanish, Greek, English and Ladino. Note the absence of Arabic.
Joseph has never recovered from the death of his horse, which he appears to have loved even more than his wife. His thoroughbred gone, his career as a jockey collapsed, he now counts on his eldest son, David, a good-looking, obsessive and arrogant hotshot jockey, to fulfill his hopes. At the same time, Joseph ignores his 11-year-old-son Victor. Often humiliated and sometimes beaten by his distressingly impatient older brother, Victor, suffering and apparently “disturbed,” seduces Robby and his friends into potentially harmful homosexual activities, while several sets of absent parents are busy playing cards or betting on the ponies.

These Alexandria Jews are cosmopolitan, and while not entirely secular, they are more likely to be found gambling, café-hopping and touring, than attending to their children or in the synagogue, even on the Sabbath.

the novel sounds a lot like it has the themes of Lawrence Durrell's Alexandria Quartet, a tetralogy of novels about people in that city, much like the characters in Goren's novel.

Durrell's quartet was made into a very good movie by George Cukor, entitled Justine. Unfortunately, the movie which features the feelings of non-Muslim dhimmis, displeased many of the movie critics who did not like its pro-dhimmi point of view. Some scenes in the movie were very memorable for their portrayal of the Muslim-dhimmi relationship. It also featured some strong sensuality.

The most deplorable,if perfectly examples of the "dhimmi servitude over the last century or so,are the services rendered to standard model Islamic regimes by the descendants of the Muslim orient's far more aboriginal Christian populations.
Examples: Boutros-Boutros Ghali of Egypt who served Hosni Mubarak,the sad,sad case of Charles Malik of Lebanon more than half a century ago; Another Lebanese Christian whose name escapes me,was a particularly pathetic,albeit laughable buffoon,who acted as Saudi Arabia's ambassador to the u.n. in the 1950s. His anti-Israel tirades on his masters' behalf always left 'em rolling in the aisles. The late unlamented Saddam Hussein's foreign minister was just as sad an example...and on and on a la nausee. More recent examples include Canada'sLouise Arbour,an ex-commissar of the u.n's morally flatulent "human rights" commission: Along with many more of her fellow Quebecois,who could not resist the opportunities offered to their morally challenged talents on those fetid premises. What excuse did these specimens have for so demeaning themselves ? And by aiding and abetting the cover-ups, mass murders, & sado-masochistic atrocities perpetrated on a daily basis by the u.n.'s Muslim string-pullers ? At least the unfortunate Christian dhimmis mentioned above could point to the hostage state of their families,clans and o-religionists as an "incentive" to "co-operation".....Or else! I'm sure many of our readers can name many more such sad examples, especially from North Africa and Mesopotamia. Please do so. And don't spare the grande guignole.

are you thinking of Jamil Baroody who was a Saudi ambassador to the UN?

Eliyahu, You're dead-on. That's him indeed. I compliment you on your photographic memory. There's lots of archival film of this sad creature in action. But he does have quite a few contemporary {not necessarily Christian]successors: Who are or were connected with the u.n. Can any body guess who ? Hint: Several are named Richard.There's also some equally sad cases of media,legal and junk academics who fit that role perfectly. Hint: several are named "Tony". Or are they more in the role of the false "mashiach" Shabtai Zvi. Who arose out the carnage
& trauma of the Cossack uprisings & the Thirty Years War after 1650?