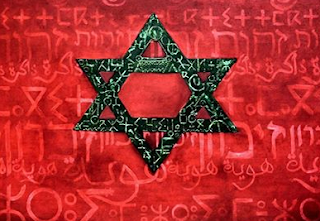 A Moroccan artist was forced to take down a painting bearing the Star of David at her exhibition in a public gallery in Casablanca.

Chama Mechtaly was told by the authorities and gallery director she could face  jail if she did not remove the painting, which they said might offend some people, especially religious extremists. She eventually complied, and only the caption was left on the white wall: Moroccan flag revisited. The exhibition, entitled Zikaron ('Memory' in Hebrew)  ended on 8 July.

Mechtaly, who has Amazigh Muslim and Jewish roots, explores questions of identity in her work and is particularly interested in the unrecognised contribution of Jewish and Berber (Amazigh) women to Moroccan identity.  She believes that recognising  Jewish identity is essential to understanding Moroccan identity.

"We talk a lot about pluralism and tolerance in Morocco", Mechtaly wrote on her Facebook page, "but this talk is not reflected in reality and in the public school system. The reality is that Jewish and Amazigh identities in Morocco are either folklorised or ignored."

Children are being made to choose between being  Muslim or Jewish, Arab or Berber, she contends - a 'divisive mindset that does not work in a globalised world'. It also goes against the Moroccan Constitution, which recognises the Jewish and Amazigh components of Moroccan identity.

Until 1915, the Moroccan flag bore a six-pointed star recalling the seal of Solomon. It was replaced with a five-pointed star by the French resident-general, Hubert Lyautey.

The Moroccan flag as it appeared in the Larousse dictionary (1924 edition). Below: Moroccan coin owned by commenter Sammish. It bears the inscription 'empire cherifien': 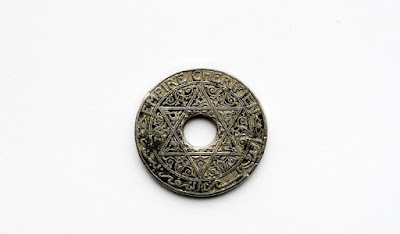 I wonder why the coin was still in circulation - unless it was pre-1915.

Yes, I think there was some still in circulation even in 1950's. I have seen some of them. One coin had a hole in the middle, and the insignia of "Empire Cherifien" still there with its Arabic translation. No mention of any central bank, just a huge star of David. It is a beautiful coin, worthy of a shekel.

I have one picture of it, but I cannot past it in the comment section.

I bought my Moroccan coin in the 1950s from a coin dealer. I assume that it preceded the French takeover.