Do you know Pat from Pakistan? 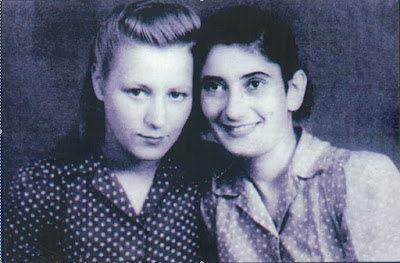 It's a long shot, but do you recognise the young woman on the left? She will be in her 80s, if she is still alive.

Her name is Pat Massey, and she was friends with Alice, whose mother was a Baghdadi Jew from Iraq.

The two young women were close friends back in the mid 1940s.  The photo was taken in Karachi, India, (now Pakistan). For years, Alice kept it on her mantlepiece.

Pat Massey was Austrian and had escaped from a Nazi death camp with the help of another young couple.  Alice found her one day on a street corner, in ragged clothes.  To cut a long story short:  Alice took her home to meet her family.  The family took Pat in and she stayed with them for several months, before she met and ended up marrying a British soldier who happened to be posted there at the time (India was still under British rule then).

Pat and her British husband soon left for England and Alice never heard from her again.

Alice is now 86 and lives in Canada. She would like to get in touch with Pat Massey before it is too late.

If you can help, please email  bataween@gmail.com
Posted by bataween at Friday, July 03, 2015

Thanks for posting this Bataween. Alice is still very much alive. Anyone with information please help. There is a facebook paged dedicated to this called
"Pat Massey - Where are you?" thank you all. Wayne C