Who will save the Christians of the Middle East?

Wars of identity break out when order breaks down, writes Walter Russell Mead in this masterful essay in the Wall St Journal on the disappearing Christians of the Middle East. While Christians have never been the only victims, Muslims have more often been the perpetrators. (With thanks: Eliyahu) 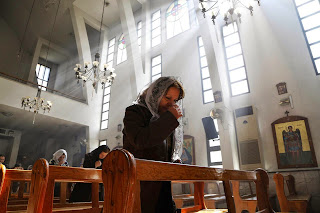 A woman prays for Assyrian Christians at a church in Damascus (photo: Reuters)

During the many centuries of imperial rule, the peoples of the region became scattered and mixed. But the region was a salad bowl, not a melting pot; groups retained their distinctive customs and beliefs wherever they went, and different ones served different economic roles. Merchants and skilled workers might be German, Jewish, Armenian or any of a half-dozen other ethnic groups. Eastern Orthodox peasants might be ruled by Catholic or Muslim aristocrats. Rabbinical courts heard cases involving only Jews; the various groups of Christian clergy handled such matters among their flocks.

But the old arrangements could not withstand the rise of nationalism and calls for self-determination. When the Balkan peoples struggled to throw off Ottoman rule in the 19th and 20th centuries, they wanted ethnic nation states like the ones they saw in the West, such as Sweden, Denmark and France.

Wars of independence became wars of peoples and wars of religion. Turks massacred Christians, whom they suspected of sympathizing with the rebels, and Christians massacred and drove out Turkish civilians and Muslims on the side of the empire. And of course, from time to time, everyone took a turn persecuting the Jews. From the war for Greek independence that began in 1821 up through the chaotic collapse of the Ottoman empire in 1923, such wars swept through the region, and atrocities became almost routine. Peoples who had lived cheek by jowl from time immemorial participated in unspeakable brutalities against their neighbors.

Wars of identity break out when order breaks down—which is what happened across the region as the Ottoman and Russian empires collapsed. More recently, we have seen the return of such conflicts in Yugoslavia after Tito’s death and in the Caucasus and now Ukraine following the fall of the Soviet Union. In Syria and Iraq, a series of colonial masters and locally grown despots maintained a brutal order from the 1920s through the last decade. But neither the colonizers nor the despots could provide permanent security.

The role of Islamist fanaticism among Sunnis and Shiites in the latest round of violence should not be minimized, but Christians are not now and never have been the only victims of these wars. From vicious massacres in the Balkan wars of independence to the destruction of the Circassians (a predominantly Muslim people of the Caucasus), the mass deaths of Crimean Tatars and the more recent slaughters in Bosnia and Chechnya, Muslim communities have often fallen victim as well. In the spreading sectarian conflict between Shiites and Sunnis, the murdered innocents and penniless refugees fleeing for their lives are usually Muslim.

Still, in the wars of identity raging across the post-Ottoman Middle East, Muslims have more often been the perpetrators and Christians the victims. That is certainly true today in Iraq and Syria, where Christians are for the most part unarmed and much of the killing is being done in the name of radical Islam.
Over the centuries, Middle Eastern Christians have developed many survival strategies. One is to stay invisible. Christians have often survived best in remote areas, and those in more densely populated areas often do their best to avoid antagonizing their neighbors. Many Assyrian Christians fled into the mountainous regions of Syria and Iraq to escape Ottoman persecution during World War I, and the Armenians in the isolated, mountainous hinterlands fared better than their more visible compatriots in Istanbul.

Another survival strategy for Christians has been to find foreign protectors. In the 19th century, the Christian powers in Europe and the U.S. took an increasing interest in the situation of Christian and other minorities in the Ottoman lands. The Orthodox looked to Russia; Catholics in the region looked to France; Britain and the U.S. asserted a right to protect Ottoman Jews as early as the 1840s; and Armenians often looked to the U.S., among others, for help.

This strategy had its successes, but it proved costly. Turks justified the Armenian genocide as a necessary measure against a pro-Russian Armenian rebellion in World War I. Assyrian Christians provided troops for the British against Arab and Kurdish rebellions against British authority in the 1920s; they paid a heavy price when the British withdrew and the retaliations began.

As Christians in the Middle East have learned at great cost, the Western powers and so-called “international community” are weak reeds. They have been (and still are) slow to intervene, and their interventions have usually been halfhearted, short-term and subject to the vagaries of great-power rivalries.

Yet another Christian survival strategy was to support the development of a secular Arab identity in which Christians and Muslims could meet as equal citizens—just as Catholics and Protestants can be German or American citizens. Many of the most influential Arab nationalists (including many radical Palestinians) were of Christian origin.

People such as Michel Aflaq and Antun Sa’adeh of Syria and George Habash of Palestine made significant contributions to Arab nationalist thought, and the era of secular Arab nationalism allowed many Christians to play more prominent roles in the region. Anti-Zionism also became one of the ways that the Christians of the Middle East could demonstrate their Arab bona fides. To this day, intense support for the Palestinian cause is common in Arab Christian communities.
Unfortunately for Christian hopes, secular Arab nationalism lost its allure. The titans of the nationalist era too often became ineffective despots presiding over failed states. As the intellectual pendulum of the Arab world has swung back toward Islamist ideas about politics, Christians have found themselves ever more marginalized.

For Christians, a final survival strategy was to cling to strong rulers. In Syria, Iraq and Egypt, they attached themselves to rulers such as Hafez al-Assad, Saddam and Hosni Mubarak (and now Abdel Fattah Al Sisi). Such alliances had their uses for both parties. Christians achieved a measure of protection and stability; they were repressed no worse than anybody else, and a handful achieved wealth and political power.

For the despots, Christian allies served many of the purposes that Jews once did for kings in the Middle Ages. They were seen as loyal because they had no other place to turn—and as useful both for their services and because you could blame them when things went wrong (and, if necessary, throw them to the wolves).

They could also be counted on as intermediaries who could present the regime’s case to outside powers. It was not for nothing that Saddam Hussein named Tariq Aziz (a Chaldean Catholic baptized as Mikhail Yuhanna) as his foreign minister.
The deal between Middle Eastern despots and their Christian communities also served to conceal other divisions. In Iraq and Syria, the nominally secular Baathist regimes of Saddam and Assad were, in fact, governments that allowed a religious minority (Sunnis in Iraq, Alawites in Syria) to dominate the country’s majority. However much Christians may have disliked the cruelty of these rulers, they themselves were minorities, and they often preferred minority dictators over the risks of potentially hostile majority-run regimes.

Read article in full
Posted by bataween at Wednesday, May 20, 2015