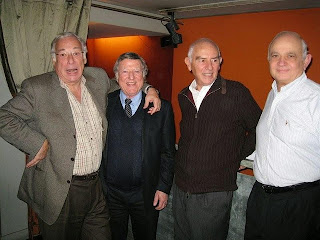 Coming to a film festival near you is a new documentary about Jews who were forced to leave  Egypt in the 1940s and 1950s.


Elliot Malki and Ruggero Gabbai have released the 17- minute trailer for 'Starting all over again'. They have interviewed Egyptian-born Jews in Italy, the US, Israel, France and Britain, demonstrating that the 80, 000 community - now reduced to eight elderly ladies - was scattered all over the world.

The interviewees recall the knock on the door in the middle of the night like it was yesterday. Their brutal expulsion, mostly after the Suez crisis in 1956, turned their lives upside down. The word 'partir' (leaving) was on every Jewish family's lips. Breadwinners had their permits to work withdrawn. One interviewee, reduced to tears, told how Jews were stripped of their nationality and given a laissez-passer bearing the words: 'one way trip - no return'.

Families were torn apart. Ada Aharoni's grandmother refused to leave, throwing herself down the stairs with a trolleyful of her precious china.

Nevertheless, whichever country they moved to around the world - Cairo-born  Lucette Lagnado remarked - Jews always preserved a longing for their country of birth.

"You can take the Jew out of Egypt - but you can't take Egypt out  of the Jew.

off topic//
new article on the Mufti of Jerusalem, Haj Amin el-Husseini and on his attitude toward Jews in Arab lands.