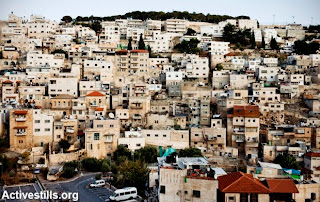 Silwan as it is today


A  former synagogue in 'Arab' Silwan (Shiloah) in Jerusalem, abandoned by Yemeni Jews in the 1930s, has been restored to Jewish ownership, in spite of  Palestinian Arab protests. The Jerusalem Post reports:

Amid accusations of a brazen “takeover” by Jews of a sought-after former Yemenite synagogue occupied by an Arab family in Jerusalem’s Silwan neighborhood early Wednesday morning, a right-wing NGO heralded the move as legal and long overdue.

“Israeli settlers took over three apartments in the Jerusalem neighborhood of Silwan, under the pretext they are absentee’s property, according to local sources,” Palestinian news organization WAFA reported.

“Witnesses told WAFA that a group of settlers, guarded by police officers, arrived in Silwan at midnight and broke into three vacant apartments owned by the Abu Nab clan. Police said the settlers had won a court ruling establishing that the three apartments are the property of Yemenite Jews [from] a long time ago,” it continued.

Despite claims that the apartments were misappropriated in the cloak of night while the family that lived there was away, Ateret Cohanim, an organization that purchases properties for Jews in Arab neighborhoods, said the property was vacant and legally acquired.

According to the organization, ownership of most of the contested property – which was seized during Arab rioting in the ’30s – was recently awarded to the NGO by the court following a protracted legal battle with its previous Arab residents.

The former synagogue, called Beit Knesset (but known by Arabs as Abu Nab), is adjacent to a Jewish- owned building called Beit Dvash and nearby Beit Yonatan, a six-story building that Ateret Cohanim built several years ago.

The left-wing NGO Ir Amim (City of Nations), which is dedicated to “the establishment of an egalitarian Jerusalem,” claimed that Ateret Cohanim legally, but wrongfully, seized the property from the family that lived there while the state turned a blind eye.

“Tonight a group of over 20 settlers took over Abu Nab in Silwan in the absence of the family that lived there,” it said, adding that the move constitutes “a series of incursions into Palestinian homes in recent months.”

“The state supports Ateret Cohanim and other settler organizations in their efforts to take over and privatize outposts in Palestinian neighborhoods in the city,” the organization continued.

While the Jerusalem Municipality said it is not directly involved in the case, which it deemed a “civilian issue,” it confirmed that the building was empty and legally acquired by Ateret Cohanim.

More articles about Silwan
Posted by bataween at Monday, May 11, 2015

The Arabs and the so-called "Left" willfully overlook the real history of the place. Jews were driven from Silwan or Kfar Shilo'ahh in an act of "ethnic cleansing" back in the 1930s.