Update to the update: a disaster from beginning to end. Spectators called to kill the Jews while waving Palestinian flags. Read the Times of Israel's report.

Update: it is not clear why the Israeli team was detained: Ynet News said that it was because the team, which had applied for visas well in advance, had an armed security guard with them.  The Israeli authorities had warned the team that they would be putting themselves at risk if they went to Morocco. After their release, the team said they were putting their trust in Moroccan security.

When it happens to Palestinians at Israeli checkpoints, it makes world news headlines. (When it happens to Israelis, you will only read about it on this website!) Moroccan authorities detained members of the Israeli national judo team for more than eight hours on Wednesday, confiscating their passports, Israel’s NRG news reported (via  Algemeiner). According to a Moroccan French news site, the Israeli flag and the sportsmen's names were erased from the official competition website. 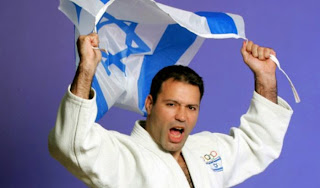 The team was finally released after the World Judo Association, which covered travel costs and has been handling security for the trip, pressured Morocco to release the Israeli teammates.

The Israeli team was visiting Morocco to participate in a Masters competition but were detained at the country’s airport upon landing.

Speaking to NRG in the midst of the ordeal, Israeli Judo Association Chairman, Moshe Ponti, said, “we have our passports and visas and awaited for permission to enter [the country].”

Ponti said he did “not know why” the team was held, “probably because we are Israelis.”

Another case where the organisers/travel agency didn't do their homework (like that cruise to Tunisia). It takes time to arrange security detail for any group that would need it, not just Israelis.

Some people in the comments to that article claim there was an armed guard with the team. Supposedly that was the reason why they were detained. : /

If that's true, how did he board a plane to Morocco with a weapon after all the security checks? That's probably what the Moroccan police were wondering as well (again, if true).

Just goes to show that anything can happen with Moroccan "officials" (or any arab officials for that matter given that whose countries have some quasi-diplomatic relations with Israel). These officials will use that little power they have in order to show to anyone that they are in control and have power over "you", in other words overwhelming you (if not to say humiliating you). "You" the Israeli or "you" the American, or French with Jewish sounding name.

One armed guard!! my God, is going to shoot at muslims if they dare insult the Israelis... That certainly will not be tolerated. How dare he?

Do you see the psychological mind thinking of an average alienated bureaucrat "official"?? That's how they think. And thoughts like these, lead to their stupid actions by detaining people. Simple explanation. We need to know their thought processes. And they are really prejudiced.

Today no one can't board a plane with a pair of scissors, much less a loaded weapon. Particularly when you land where your country has no diplomatic representation.

Sylvia,
I understand the airplane security issue, however they are situations where the rules are bent, specially in cases of terror possibility and secret services collaboration. Morocco and Israel have a good relationship in this regard. I think, and I hope, this whole incident could have been avoided if there was clear communication between Moroccan and Israeli secret services. Something went wrong in channels of communications which gave opportunities for the lower ranked officials to act the way they did by detaining Israeli athletes.

By the way, relevant to this story about Morocco is the effort by the PA/PLO to get Israel kicked out of the FIFA, world soccer federation. Leading this exclusion effort is the head of the PA's soccer federation, the veteran terrorist Jibril Rajoub who has gotten used to the good life as a politician but still hates us profoundly.
Rajoub's case against Israel is that one or more members of the PA's "national" team were detained at checkpoints by Israeli forces on suspicion of being a courier for Hamas, which appears to be true. This man was put in jail by Israel for two months or so. But the anti-Israel crowd classifies the incident as deliberate humiliation of "palestinians". They deny any right of Israel to check anyone crossing at a checkpoint, indeed Israel's right to put up checkpoints. This incident in Morocco seems to be exactly what Israel's detractors are claiming, except done by Arabs to Israelis.