Israel's Counter-Terrorism Bureau has issued a travel alert  warning Israelis and Jews to avoid visiting Tunisia following "updated information" on terror plots, the Jerusalem Post reports.  The Lag Ba'omer pilgrimage at the al-Ghriba synagogue on Djerba, which takes place on Thursday, is expected to attract thousands of visitors. 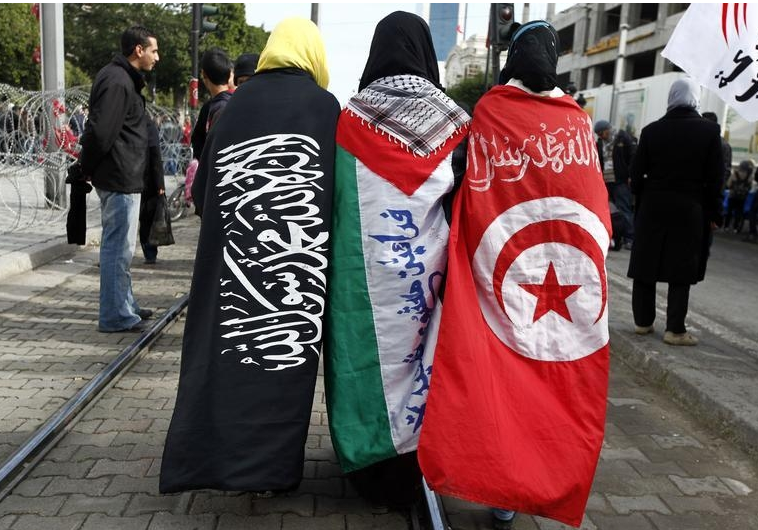 Girls walk the streets in Tunis wrapped in (Left to Right) the Salafist, Palestinian and Tunisian flags (photo: Reuters)

The Counter-Terrorism Bureau said a Level 2 alert, meaning a concrete and high threat is in place, has been issued for the country, adding, "The recommendation is to avoid visiting Tunisia.”

In March, the Counter-Terrorism Bureau warned that global jihadi elements likely will seek to carry out additional attacks on Jewish and Israeli targets, particularly in western and northern Europe.

The warning appeared in an annual travel advisory guide issued by the Bureau, which is a part of the Prime Minister’s Office.

I would extend the warning to France itself. There have been quite a few terrorist attacks in France that did not come to fruition, for whatever reason.

Many of the Arab/Muslims in France are now caught up in a spasm of hate and violence.
I was last in France in early July of last year, 2014. In certain parts of Paris, you feel a need to continually look over your shoulder.

Just today two Jewish men were attacked by a mob of 40 pro-Arab, pro-bds goons in Paris on the Boulevard Voltaire near where Ilan Halimi, z'l, was kidnapped in 2006.