The lessons of Bergen-Belsen remain unlearnt

It is not widely known that Jews were sent to Bergen-Belsen concentration camp from Libya. Barely three years later, the Jewish community of Libya was ethnically cleansed. The lessons of Bergen-Belsen were not learned in 1945, and still have not been today, with the proliferation of Nazi-inspired, anti-Jewish Islamist groups. Lyn Julius writes in the Jerusalem Post: 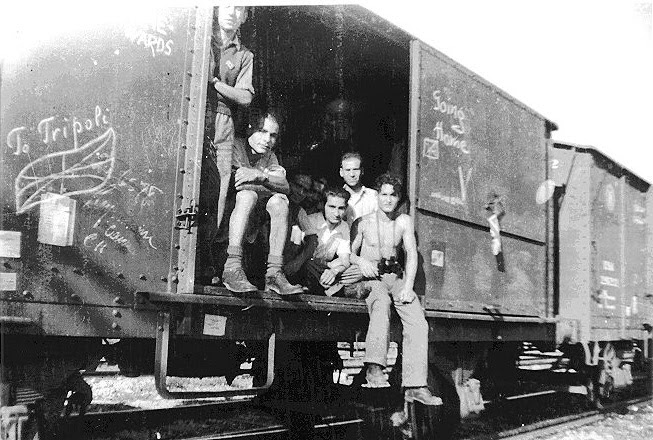 On April 15, the world marked  the 70th anniversary of the liberation of the notorious Bergen-Belsen concentration camp.


More than 50,000 prisoners, mainly Jews, died there – of starvation, overwork, disease or following gruesome medical experiments. Anne Frank was probably the most famous victim. She and her sister perished of typhus in the camp just one month before liberation.

Among the prisoners liberated on that glorious day in April were several hundred Libyan Jews, deported to Bergen-Belsen via Italy. A photo exists of these survivors, dangling their legs out of a railway carriage on which they had scrawled, “Going home” and “Back to Tripoli.”

According to The Jews of Libya by Professor Maurice Roumani, some 870 out of the 2,000 Jews in Libya with British passports were deported to Italy as part of the “sfollamento” policy to send away foreign nationals. Members of the same family could be dispersed to Morocco, Tunisia or Algeria – then under pro-Nazi, Vichy French control.

Two transports of 300 Jews, and another 120, were shipped from Libya to Naples on cargo trains to Bergen-Belsen and arrived on May 25, 1944. Jews arriving from Libya in Bologna were taken by train to Innsbruck- Reichenau, part of the Dachau camp system, in July 1943.

Reaching Bergen-Belsen relatively late in the war, the Libyan Jews survived. Some were exchanged for German POWs. They received packages from the Red Cross and obtained some relief in their working conditions. They even managed to keep kosher, exchanging cooked food for dry bread. One Jew, Zion Labi from Benghazi, started a school.

The deportation of Jews from Libya to the northern shores of the Mediterranean gives the lie to the widespread misconception that the Holocaust touched only European Jews.

Although their suffering cannot be compared to the horrors inflicted on the Jews of Eastern Europe, Jews in North Africa were not spared the impact of the war. Some 2,500 Libyan Jews were shipped by the Italian Fascist regime to the notorious Giado labor camp. One fifth died of typhus or starvation.

Neighboring Tunisia came under direct Nazi control for six months. Some 2, 000 Tunisian Jewish men, wearing the obligatory yellow star, were frog-marched into labor camps. Jews were used as slave labor in Algerian and Moroccan work camps. And all the while, thousands of Jews died in aerial bombardments as the Allied and German armies wrestled for control.

Arguably, North African states, having not yet achieved independence, were not responsible for the anti-Jewish measures adopted by the Vichy regime and the Italian fascists. But apart from individuals who saved Jews, the sympathies of the Arab masses broadly lay with the Germans.

The Palestinian Grand Mufti of Jerusalem played a central role in plotting the pro-Nazi coup in Iraq. In exile in Berlin from November 1941 until the end of the war, he broadcast anti-Jewish propaganda to the Arab world.

He proved more zealous than the Nazis in promoting the “final solution” to the Jewish question. The mufti is thought to have been directly responsible for 20,000 European Jews murdered in the Nazi Holocaust.

At the end of WWII, the mufti should have been tried as a war criminal at Nuremberg.

He was indicted, judged and convicted by Yugoslavia for crimes against humanity, arising from his pivotal role in the Handschar and Skandeberg SS divisions which deported Balkan Jews from Kosovo, Macedonia and Thrace. But the Allies shrank from offending the Arabs. The mufti remained a hero for tens of thousands.

Nazi Germany lavished money and propaganda on the Arab world in the hopes of fomenting an anti-colonial uprising. It funded the Muslim Brotherhood, established in Egypt in 1928. Its founder, Hassan al-Banna, made the Nazi concept of the Jew as the epitome of all-embracing evil, overlaid with traditional anti-Jewish Koranic prejudice, the core of the Brotherhood’s ideology. By the war’s end, the Brotherhood had a million members.

Shortly after the Belsen survivors had returned to Libya, the Jews of Tripoli and outlying villages suffered a vicious threeday pogrom, which claimed the lives of 130 and made thousands of Jews homeless.

How was this possible barely six months after news of the terrible extermination of the Jews of Europe had reached the Arab world? The November 1945 Libyan riots were a spillover from disturbances in Egypt in which five Jews were murdered. While some blame the clash of Zionism and Arab nationalism, historians report that the rioters in Libya did not shout anti-Zionist slogans. The mob did not even know what Zionism was, a Jewish Agency report stated. It is noteworthy that the Egyptian rioters, incited by the Muslim Brotherhood, targeted Coptic, Greek Orthodox and Catholic institutions as well as Jews.

It is common to view the mass exodus and spoliation of a million Jews from the Arab world as revenge for the displacement of Palestinian Arabs in 1948. A more plausible explanation is that Nazi-inspired blood-andsoil nationalism, and xenophobic Islamism, which had entrenched themselves in the Arab world over the preceding decade, aimed to destroy, or at best, exclude non-Muslim minorities from public and political life.

In 1947 the Arab League drafted a plan to treat their Jewish citizens as enemy aliens, before a single Palestinian Arab had fled.

Barely three years after the end of WWII, Arab League member states emulated Nazism with their Nuremberg-style laws, criminalizing Zionism, freezing Jewish bank accounts, instituting quotas, imposing restrictions on jobs and movement. Violence and the threat of violence did the rest. The result was ethnic cleansing of age-old Jewish communities in a single generation.

The ghost of Nazi-inspired, anti-Jewish bigotry was never exorcised: after WWII, the Arab world gave safe haven to Nazi war criminals on the run. They became military advisers and spin-doctors of Jew-hatred.

Adolph Eichmann, Nazi architect of the “final solution,” hoped his “Arab friends” would continue his battle against the Jews, who were always the “principal war criminals” and “principal aggressors.” He hadn’t managed to complete his task of “total annihilation,” but the Muslims could still complete it for him.

Not only has the virus of Nazi anti-Semitism never left the Arab and Muslim world, it has grown exponentially. Muslim immigrants have carried the virus of Jew-hatred back into European countries. Saudi petrodollars have financed the spread of Islamism, with its implicit anti-Semitism, worldwide.

Eichmann would have been pleased to see that the Arab world is effectively judenrein: there are no Jews in Libya, and no more than 4,000 in the rest of the Arab world today. The Muslim Brotherhood, and its local Palestinian branch Hamas, al-Qaida, Islamic State and assorted Islamist groups still carry the torch for an ideology born in the Nazi era.

Cross-posted at Harry's Place
Posted by bataween at Thursday, April 16, 2015