Jews comprised three percent of Morocco's five million inhabitants before 1948. Now there are 2, 500 or fewer, their fate tied to that of the 'protective' royal family; their community is a shadow of its former self. Here is a timeline showing the main stages in a period of dramatic decline. 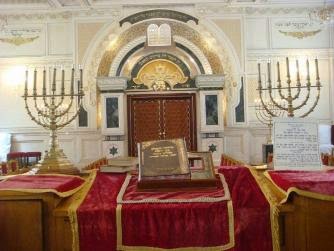 1912 Establishment of French protectorate signals end of dhimmi status of 230, 000 Jews, but they are denied French citizenship, with few exceptions

1930s Antisemitism mounts from the French far-right and Moroccan nationalists

1936 rumour that Jewish girls are having a bad influence on Muslim girls leads to 1937 'pogrom': In Meknes, nationalists ransack 40 Jewish shops. Jews counter with a call for a boycott of German goods.

8 August 1941 Jews sent back from city European districts to mellahs.

1955: 1,700 Jews escape to the European city of Mazagan after large number of houses in the Jewish Quarter were set on fire and burned to the ground ; 200 Jews left homeless

1955: Wadi Zem: family of five and two other Jews murdered.

And yet when we tell European Jews to get out and run for their lives we're told how that's logistically 'impossible'.

off topic/
Zionists are Jews who have betrayed the dhimma:

Eliyahu
Certainly, a constant theme in the Arab world- Dhimmis must know their place.
http://www.sixdaywar.co.uk/world_islamic_conference_september_1967.htm
But killing them all would defeat the main usefulness of dhimmits: a source of income through the jizya tax.

Over the centuries the Muslims got rid of the dhimmis in the Islamic states through conversion, driving dhimmis out, or murders and massacres of dhimmis. So there were ever fewer dhimmis to pay tribute, to pay jizya. Hence, these countries became ever more impoverished over the centuries as they lost dhimmi peoples. You can call that biting the hand that feeds you. But the Muslim fanatic doesn't see that.