1930s Iraq: Jews have the best of everything 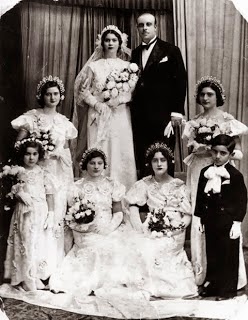 This article by Ameen Al-Mumaiiz from his book, Baghdad as I know it (1930), gives a fascinating insight, through the eyes of a Muslim, into how Iraqi Jews were at the forefront of modernising the country. It must be emphasised, however, that the Jewish upper classes were a small percentage of the community as a whole, most of whom, as per the autobiographies of Nissim Rejwan and Salim Fattal, were poor. Thanks to Ivy Vernon for her translation.

"The Iraqi Jews ate the most expensive and rare of fruits and vegetables. As soon as the fruit is available in the market, the Iraqi Jew would buy it no matter how expensive.

He eats a healthy( kosher) meat and chicken diet checked by the Rabbi - this in obedience to religious edicts which orders them to thank God for the first season fruits, as well as to check the slain animal that no bones are broken and that it is free from any infectious diseases.

The majority of the Jews wear the best quality clothes sewn by the superior Baghdadi tailors (Armenians, Muslims, Jewish or Farma the Indian) to celebrate their festivals as per the Torah edicts. Most of them ..............celebrate in their houses with the best foods, like the fatty chicken breasts and sweets (Haiwwa).

The Jewish man will frequent the best snack bars and cafes in Baghdad with names like the River Cafe, al Basha, Shabandar, Moshe, and Mummaiiz Cafe, where he can relax and be entertained, as well as make business deals. He does not care how much he pays to the owner of the snack bar.

They own the best clubs in Baghdad, as well as the high class ones i.e. Al Rashid, Laura Kaddouri. These are exclusively Jewish and no-one else is allowed to join.

They also have the schools with the highest standards, both primary and secondary: The Alliance, Shamash and Frank Iny schools, so that sending their kids to finish their higher education in the American or European universities can be achieved easily with no problem, conditions or limitations.

If, for example, an Iraqi Jew needs to defend himself in court, he can bring in the best lawyers from abroad (as seen in the case of the extremely well off Mr Shemmail Jemaila) when he brought in Mr Parkiton-Ward, the famous English lawyer to do so.

The Jews use the most luxurious and pedigree milking cows, handle the rarest of domestic birds, the parrots, canaries and love birds. They were the first to import American cars into Iraq - for example the Ford agents were Ibrahim and Shafiq Ades.

The agents for General Motors were the Lawee brothers. They appreciate the nutritional value of the Nabeq (tiny soft fruit from trees), the manna, Jammar (from wood in the trees), roasted beetroots, and they will pay whatever price to get them. The Jews will only buy live fish and buy it directly from the (supplier or fisherman?).

They will put up their summer tents on the riverside only in the best locations like the A'Athamiyyah beach and Al Kahouriya. They only left when threatened by Nu'man al A'thami, as he was afraid they were plotting to make the area all Jewish.

The Jewish Rabbi was the most skilled in circumcision and many Muslim families resorted to using his skills to circumcise their boys.

For foreign languages, the best teachers were Jewish, for example Shummail for Fench and Heskel Effendi for the English language. The best swimming instructors were Jewish at Said Sultan's Organization and the teacher Saffani was the most able.

The majority of the merchants who imported the hygienic artefacts and instruments from abroad were Jewish... Salem Shamoun introduced the bathtub and the boiler to bathrooms. The Shasha family imported the variety of cloths in the Saffaffir warehouse. The Hakkak family imported the "Singer" sewing machines, the gramaphones "Lady's voice", and "Pythaphone" records."
Posted by bataween at Wednesday, April 29, 2015