According to Arutz Sheva, the leader of the centre-left Zionist Union party blamed its failure to win Israel's election on a speech at a party rally by artist Yair Garbuz, backed by playwright Yehoshua Sobol. In what was widely taken to refer to Israel's traditionally religious Sephardim, Garbuz derided 'talisman kissers and tomb worshippers'. In a TV interview leading politician Shelly Yafimovich also regretted that Garbuz's remarks cost the Z U the election. 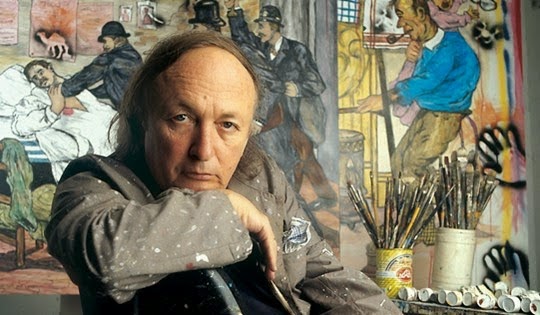 Days after a somewhat unexpected loss, Zionist Union Chairman Yitzhak Herzog has found a scapegoat for the party's poor showing.

According to Herzog, Yair Garbuz - the now-infamous artist who said before elections that Israel was under the control of a cabal of “swindlers, molesters, and mezuzah kissers" - was the reason for the party's big loss.

“He ran an obsessive campaign full of lies and fear-mongering, and he managed to ruin Naftali Bennett's Jewish Home and Eli Yishai's Yachad, and to take votes from Shas and Yisrael Beytenu. It's as if Netanyahu reinvented himself last Friday,” when the polls showed Likud trailing his party, Herzog said. (...)

“There's no question that the speech given by Garbuz hurt us,” he said.
Although he did not condemn or distance himself from the comments when they were made, Herzog said Thursday that he obviously did not subscribe to those beliefs.

“I have nothing to do with Garbuz,” Herzog said. “I have a golden rule - never to criticize beliefs and opinions, or to insult someone for their faith.”

This is the same kind of thing Obama ran with in 2008. He complained about 'those backwards people who clutch their bibles and their guns.' In the US that kind of bigotry works better.

"Herzog said. “I have a golden rule - never to criticize beliefs and opinions, or to insult someone for their faith.”"

Note he didn't say he wouldn't insult someone for their ethnicity. Prudent. We might remind him the Wikileaks cable where he charcterized to a US ambassador his fellow Laborite and leftist Amir Peretz as "inexperienced, aggressive and Moroccan."

As to Garbuz, the problem is not that one despicable creature, but the audience that enthusiastically applauded him.They're the problem and he only said what they wanted him to say.

Regarding Bibi, I want to take this opportunity to condemn unequivocally his statement about the Arabs. Because we've been there, done that. This is exactly the same famous statement -albeit with different words- that Shimon Peres made in 1974: "You want a government of Mizrahim??!!" You can't condemn one and not the other.

Whatever one may think of Netanyahu's statement calling on Jews to come out and vote, I think that a message used by Labor in this past election campaign was much worse. Billboards in the Tel Aviv area carried the slogan:
With Bibi and Bennett we are stuck with the palestinians forever.
I think that this Labor Party message is much more demeaning to Arabs than what Netanyahu said.

As much as I am mad at Labor, Elyahu, that message is not as you interpret it.

On the other hand, Arabophone citizens of Israel as well as those from East Jerusalem who chose Israeli citizenship and therefore vote in Israeli elections insist on referring to themselves as Israeli Arabs. Ironically this makes Israel the last bastion of Panarabism and they won't bulge from it.

Labot meant by that message that they will withdraw from the settlements and implement the two state solution.

Sylvia, of course I understood what the Labor party meant by the message, which you accurately convey. But it is demeaning to Arabs nevertheless. It says that it is distasteful to live with Arabs. After all, the "left" could also say that we should offer these people [east Jerusalem Arabs, Judea-Samaria Arabs] full citizenship. Or they could demand that Israeli citizenship be imposed on them. The message says that it is distasteful and unpleasant and degrading to live with Arabs [or "palestinians" if you like].

As to how the Arabs identify themselves, I really don't know although Arabs live on my street and in nearby Arab neighborhoods. However, many of the Israeli Arab politicians represented in the Joint Arab List have been claiming that the Israeli Arabs are really "palestinians" for years now. Ask Hanin Zu`abi.

Rabin said that he wished that Gaza would sink into the sea. That was not exactly an expression of respect and goodwill towards the inhabitants of that city. Yet he is glorified and exalted as almost a saint by the anti-Bibi crowd in Israel and especially in America.

http://www.israelhayom.com/site/newsletter_opinion.php?id=12037&r=1
Tsipi Livni :'Arabs represent a threat'. She said so two days after the election.

" After all, the "left" could also say that we should offer these people [east Jerusalem Arabs, Judea-Samaria Arabs] full citizenship."

I don't know where you get your information, but East Jerusalem non-Jewish residents have had the option of Israeli citizenship and thousands have taken that opportunity. As to the other areas of the West Bank, they are already Palestinians, citizens of the Palestinian Authority and with legal Palestinian passports. Those who are not Israeli have slightly different ID cards to facilitate their movement to and from Israel, not to impose citizenship.

No, the message says it it distasteful to rule over people who are already autonomous.


The Israeli Arabs have maintained tthe name they had during the British mandate. That's how they call themselves: Israeli Arabs and the name Arab is in every one of their organizations. They even have a bank that cater to their specificf needs which although part of the Leumi group, they call "Arab Israel Bank".

I know there are those who confuse the names in order to confuse the issues, but I prefer to deal with reality.