In what might be the first demonstration of solidarity with a murdered Jew in an Arab country, some 150 Tunisians staged a vigil for Yoav Hattab, 21, whose family still lives in Tunis. Several demonstrators criticised the 'disgraceful' silence of the Tunisian authorities. 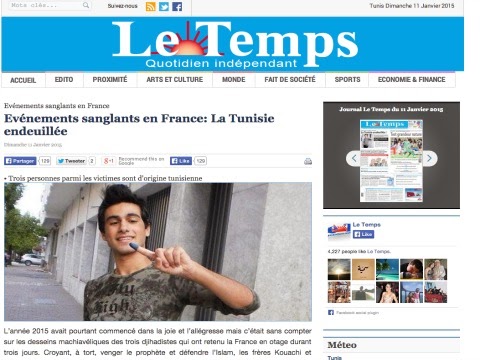 About 150 people, including a number of Muslims, attended a memorial service Saturday night outside the Tunis Great Synagogue to honor the slain Yoav Hattab, Israel Radio reported. Hattab was the son of the city's chief rabbi ( the rabbi of the Great Synagogue - ed).

Participants lit candles and held up pictures of Hattab alongside Tunisian flags.

Some of those in attendance criticized their government's silence in the face of Hattab's death.

Hattab was killed on January 9 in an attack on the Hyper Cacher supermarket in Paris. He studied marketing in the city and worked in an office near the supermarket.


Tunisian Sara Horchani deplored the official silence surrounding the murder of Yoav Hattab. Only the Islamist party Ennahda condemned it:


"This silence was an affront to Tunisian history. It's an affront to democratic principles.This silence affects the Tunisian citizen I am. It hurts me as a Tunisian Republican,  as a fervent advocate of equality. The basis of any democracy is equality between citizens irrespective of their origins.

"Sad to see the (Islamists ) Ennahda, of all parties, steal a march over Democrats and leftist parties.

"It is the duty of Tunisia to honor Yoav Hattab. He is a Tunisian citizen, the victim of a horrible murder. Murdered because he was Jewish. Because he was in a kosher store for shopping before Shabbat.

"It is the duty of Tunisia to respect all its citizens regardless of their confession. Enough of these perpetual suspicions of lack of fidelity and loyalty to our fellow Jews."