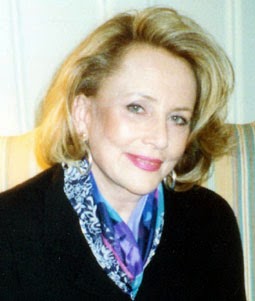 The journalist  and author of 'From time immemorial' Joan Peters (pictured), who died on 5 January 2015, was not without her critics. In charting population movement to and from Palestine, however, she was one of the few to point out the flight of Jews from Arab countries. Michael Curtis writes this tribute in The Commentator:

Concerning the refugee issue, Peters emphasized the point that the number of Jewish refugees driven from Arab lands in the late 1940s was at least equal to the number of Palestinian Arabs displaced from areas held by Israel after the 1948-49 war, a war initiated by Arab states against the newly created State of Israel.

The question that arose was the authenticity of those Arab refugees. Peters’s starting point was the analysis of the pattern of Arab immigration and the population movements of Arabs from 1893 to 1947 in five regions of Palestine.
Demographic experts can legitimately disagree about the figures presented, as some do for tactical, political as well as scholarly reasons, about the population statistics, but the thrust of the presentation is clear.

In their rewriting of history, Palestinian leaders and writers argue that a Palestinian people had been living in the area from the days of the Canaanites, of whom they claim to be the descendants, for seven thousand years.

They compare this proposition to the claim of Jews, who have been in the area for “only” 5,000 years. Mahmoud Abbas, hardly a profound historical scholar, declared that Jews are “incidental in history. We [Palestinians] are the people of history. We are the owners of history.”

This is the crux of the Arab-Israeli conflict: the refusal of Palestinians to acknowledge, or at best their attempt to minimize, the historic relationship of Jews with the land of Palestine.

One need not bother with the absurd Palestinian fairy tale about 7,000-year-old ancestors. So much evidence places Jews in Palestine.

Peters reported on the analysis of population movement in the 20th century, an analysis that presents a picture relevant to present discussion of the Middle East.
Peters showed that from 1893 on, there were more Jews in areas of Jewish settlement of Palestine than Arabs. Jewish settlers did not displace native Arabs. On the contrary, they attracted them. Some Arabs came from other parts of the Palestinian area to live in the Jewish areas. But most came from surrounding Arab countries and areas.

Peters’s argument echoes conclusions of official British reports. The Hope Simpson Report of October 1930 comments on “the illicit [Arab] immigration through Syria and across the northern frontier of Palestine.”

At the same time, that report recommended limiting Jewish immigration based on the “economic absorptive capacity” of Palestine. A similar recommendation was made in the British Passfield White Paper, also of October 1930.

A somewhat different emphasis on the issue was made in the Peel Commission Report of July 1937. It stated, “Much of the land [where Jews had settled] now carrying orange groves [was] sand and uncultivated when it was purchased. The shortage of land is due less to the amount of land acquired by Jews than to the increase in the Arab population.”

The data undercuts Arab territorial and national claims. The exodus of Arabs as a result of the 1948-49 war was mostly of relatively recent arrivals. They left to go to areas from where they or their ancestors came: other areas of Palestine, such as the West Bank, or to the country of their ancestors, where they have not, with the exception of Jordan, been integrated.

In this respect, in the light of endemic anti-Semitism in the Middle East, it is also worth pointing out the historical truth about Jewish experience in Arab countries.
The concept of a “golden age” for Jews in those countries during which Jews and Muslims lived happily together, particularly in the Magreb countries, is an imaginary portrait. More accurately, Jews, and Christians, too, were second-class citizens, dhimmis, who lived in a condition of inferiority, or in misery and fear.
Rather than a state of equal coexistence, more usual were persecution, humiliation, and massacres in Casablanca, Fez, and Settat.  Forced conversions and accusations of ritual crimes were not unknown.

It is high time that “the international community” and well-meaning social and religious organizations gave up their adherence to a fallacious narrative to validate their imagined view of Palestinians, and perhaps their anti-Semitism, to consider rationally and honestly the Peters version of the conflicting claims of Jews and Arabs in the Middle East.

Obituary for Joan Caro (Peters) (Chicago Tribune - with thanks: Pablo)

The Jews were so incidental to Palestine, and the region in general, that many Jewish place names remained consistent to modern times, and of course, Islam itself was "built" upon Judaism. And the counterclaim by Islam on Palestine is built upon a rather fanciful claim that Mohammed ascended to heaven on a winged horse from "the far mosque".