Charlie woman murdered 'for being Jewish'

Segolene Vinson was spared death at the hands of the terrorists of the Charlie Hebdo massacre 'because she was a woman'. But Elsa Cayat was not spared: presumably because she was a Jew. Like Georges Wolinski, Cayat was of Tunisian extraction. 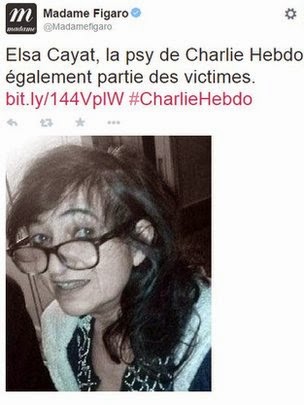 Elsa Cayat, born in 1960, was the daughter of Georges Khayat, a  native of Tunisia ( Sfax), who settled  in France. A psychiatrist and writer, she authored "Jeunesse", the first volume of a trilogy on Jewish life in Tunisia under colonial rule.

The BBC reports that Elsa Cayat,  the only woman among the 12 victims, the 54-year-old wrote the magazine's Charlie Divan (English: Charlie's couch) column.

Her column wandered from subjects such as parental authority to the roots of the Holocaust, Madame Figaro writes (in French).

A trained psychiatrist, she had a vast number of patients, attracting intellectuals with her listening skills and analytical powers, according to her aunt, Jacqueline Raul-Duval.

One of her long-time patients, who gave her name only as Valerie, wrote an affectionate tribute on Facebook in which she says, "I think of her husband, her adolescent daughter, her big padding dog, her patients whom she is leaving without their mirror, her family, her friends."

Her cousin, Sophie Bramly, said she feared she had been killed for being Jewish.

****
Tunisian Jews have paid a heavy price in the massacres at Charlie Hebdo and Hyper Casher in Paris. As well as Elsa Cayat, Tunis-born Georges Wolinski, a cartoonist for Charlie Hebdo, was murdered. Three of the murdered hostages in the kosher supermarket were from Tunisia: Yoav Hattab, Johan Cohen and Francois-Michel Saada.

For Jews in France, plus ca change

Email ThisBlogThis!Share to TwitterShare to FacebookShare to Pinterest
Labels: Antisemitism, Jews of France, Jews of Tunisia