Ilya Avramoglu's bra and corset shop in Istanbul has survived much antisemitism in the past; this time, however, the antisemitic threat is (allegedly) coming from his Catholic landlord, Sophia Jones writes in the Huffington Post: 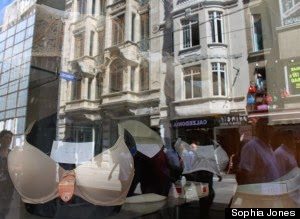 In one of the wood-paneled walls at the back of the shop, just below a poster of a smiling woman in a black bra, is a small hole. It’s all that is left from an attack on the minority-owned shop 60 years ago. It was nearly his grandfather’s downfall.

In early September 1955, rumors spread like wildfire that the home of Kemal Ataturk, the widely loved founder of modern Turkey, was set ablaze by Greeks (the rumor was entirely false). What ensued was a slew of attacks on homes, churches, schools and shops of Greeks, as well as Armenians, Georgians and Jews. The actual death toll of what is now known as the Istanbul pogrom is unknown; at least a dozen people were killed. Istiklal, then home to many shops owned and run by foreigners and minorities, was totally destroyed.
Kelebek was ransacked, its money and merchandise stolen. Nothing was left except debris and broken glass, and there was a hole in the wood paneling -- which Avramoglu now proudly shows off as a mark of defiance. Avramoglu holds up a photo of his grandfather standing in Kelebek Corset Shop after it was destroyed by a mob in 1955 during the Istanbul pogrom.
Two faded black and white portraits, one of his grandfather, and another of Ataturk, hang in the shop like a silent reminder of the time.

Two generations later, Avramoglu says he still isn’t safe from persecution. He vividly recalls two major anti-Semitic attacks in particular: In 1986, two gunmen locked the doors of an Istanbul synagogue and open fired during Sabbath prayers, killing at least 21. And then in 2003, twin car bombs exploded near two synagogues in central Istanbul.

Avramoglu's sister, who was attending a bar mitzvah in one of the synagogues during the attack, survived. But more than 24 people were killed and 300 wounded, the majority of them Turkish bystanders.

Rising levels of anti-Semitism have rocked Turkey’s Jewish community. Scores of Jews have left home, bound for Europe, the United States and Israel in search of religious freedom and a better life. In some cities, like Antakya, there are only a few remaining members of the ancient communities.

Avramoglu’s family started a Change.org petition pleading to Pope Francis to rescind the eviction order, and they plan to go to court. His lawyer tells him they’ll lose, he says, somberly. “The law is against us.”

Avramoglu cannot support his large family if he gets evicted. A local Jewish foundation is already pitching in to help pay his son’s university tuition. Avramoglu hangs fliers condemning his eviction order.
On Thursday, Avramoglu taped up his eviction order in the storefront and a poster in Turkish reading, "Where is the mercy? Where is the conscience?" Passersby stopped and watched him, whispering among themselves.
“We support you fully,” a woman said to Avramoglu, briefly poking her head into the store.

“An era is ending,” murmured a man who has been coming to Kelebek for 48 years.

For Avramoglu, his shop is a monument, not just to bras and underwear, but to religion and identity -- which is what he’s fighting for. Kelebek is his life’s work, and he's proud to have achieved his grandfather’s dream.

“This store is everything for me,” he says. “It’s history.”

Read article in full
Posted by bataween at Wednesday, September 03, 2014

I read the linked article, and did not find any factual support for the storeowner's accusation that the eviction is motivated by anti-Semitism. In fact, the article reports that the church/landlord is evicting many of its tenants (presumably, not all are Jews), something that happens everywhere in the world when landlords think they can get higher rents than their current tenants can pay. It does not seem wise, at a time when Jews around the world under threat, to trivialize the issue of anti-Semitism by ascribing anti-Semitic motives to every instance of run-of-the-mill, everyday adversity that Jews face in life and business, just like everyone else in the world.

That pogrom in 1955 drove tens of thousands of Greeks out of Turkey. This was after both Turkey and Greece were members of NATO [presumably NATO allies], which was supposed be a body made up of countries that supported freedom and human rights. But the USA has long had a very forgiving attitude toward fascistic actions going on in turkey and other Muslim countries. Obama is no different in this regard, treating erdogan as his BFF, never criticizing erdogan's vile anti-Israel smears and his threats against Israel, Greece, Cyprus, and even the EU.

Ian, the storeowner does claim that his treatment is harsher than most of the other tenants slated for eviction. The priest seems to have a personal vendetta against him and his family, he claims.

Bataween, does he say how his treatment is harsher than that given other tenants? And even if he is being treated more harshly than other evicted tenants (are any of them Jews, by the way?), just because there is some particular dislike between himself and the priest handling the church's business does not mean that anti-Semitism is at the root of the matter. Again, I think we Jews can only damage ourselves by turning every business or personal conflict between a Jew and a gentile person or institution into a Jewish issue.

He does not go into detail. But it is possible that the priest's dislike is religiously motivated. We can only speculate.

"But it is possible that the priest's dislike is religiously motivated. We can only speculate."

That's precisely the point. The Jewish community should not run into situations like this accusing people of anti-Semitism when the only basis for the accusation is speculation. In this case, if the store proprietor does not give any facts supporting his assertions, this is not a situation on which to waste time, effort and moral capital.

The Jewish community is not making any accusations here. The journalist is simply conveying Avramoglu' s own assertions. The article is interesting because it shows the impact of antisemitism in Turkey on one shop, now threatened with closure, through the decades.

The article does not "show" any impact of anti-Semitism. It just reports an accusation of anti-Semitism for which no factual basis has been given. For a Jewish publication to focus on this individual's losing his lease is a waste of time and does not serve the interests of Jews who are facing real anti-Semitic threats.

There is something else that Turkey is doing that reflects on the hostility against Israel for supposedly putting Gaza under siege. Gaza is not under siege but Israel has been restricting the entry of certain goods and kinds of goods into Gaza, such as weapons. Egypt likewise restricts the entry of weapons into Gaza.

But nobody talks about the Turkish embargo or blockade against Armenia that has been going on for more than 20 years. This is a complete embargo. As far as I know, nothing is allowed to go into Armenia from Turkey. This embargo or blockade obviously makes Armenia's foreign trade much more difficult. And Armenia also faces a blockade by Azerbaidjan. But nobody talks about those blockades.