Iraqi-Jewish archive to go on tour

Summer 2014 has come and gone but the Iraqi-Jewish archive has still not been returned to that war-torn land. According to the US State department, the archive, whose highlights have been exhibited in Washington and New York,  will embark on a tour of more American cities. Report in the Washington Post: 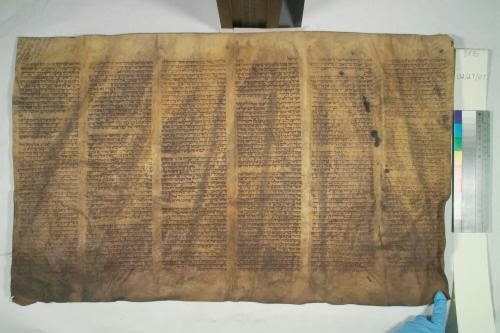 WASHINGTON — After the U.S. Army rescued a trove of Jewish artifacts from the basement of Saddam Hussein’s secret police headquarters, many American descendants of Iraq’s once vibrant Jewish community had an urgent question.
Is the U.S. going to return these artifacts to war-torn Iraq?

The answer was yes. Over the objections of many Jews whose families came from Iraq, the U.S. had agreed that the “Iraqi Jewish Archive,” painstakingly restored in a laboratory outside Washington, would return to Iraq in the summer of 2014.

But the summer of 2014 is nearly over, and the archive is still in the U.S. Now a new plan will delay at least some of the collection’s journey back to Baghdad, where it had been discovered — moldy and disintegrating — in the flooded basement of the former dictator’s intelligence headquarters.

According to the State Department, highlights of the archive — exhibited in Washington and New York this year and last — will soon embark on a tour of several more American cities.

Some see this extension — at a time when much of Iraq is in chaos — as an opportunity to revisit the question of the archive’s destiny. They want its Torah fragments, prayer books, documents and photographs, dating from the mid-16th century to the 1970s, housed permanently among Jewish communities capable of caring for them.

“There is no regard for human life there now, so how can there be regard for our precious legacy?” said Carole Basri, vice president of the American Sephardi Federation, a group of Jews of Spanish, Portuguese, Middle Eastern and North African heritage.

Sign the petition: don't let the Iraqi-Jewish archive go back to Iraq
Posted by bataween at Friday, September 12, 2014

why isn't there legal action by the Iraqi Jewish community to recover the archive?

I think they are keeping their powder dry for the moment