The curious case of the 'Jewish' Kurds 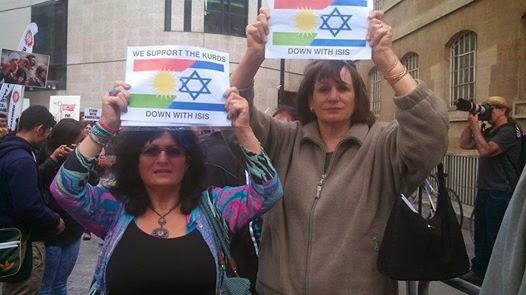 Jews demonstrate in solidarity with Kurds. Do Kurds have a Jewish skeleton in their cupboards?

The current  rapprochement between Jews and Kurds, standing together against ISIS and in favour of the protection of oppressed minorities in Iraq,  has obscured an aspect of their historical relationship not often talked about : how many Kurdish Jews converted to Islam over the centuries?

The 18,000-member Kurdish-Jewish community was airlifted to Israel in 1950, so  Jews attending demonstrations in solidarity with Kurds are surprised to hear that Kurds have Jewish family members living in Israel or recall that their grandmothers were Jewish. One estimated that the 'Jewish' Kurds living in the Kurdish region numbered 150,000. This figure is almost certainly a fantasy.

In Kurdistan, they call them Ben-Ju: they are the descendants of Jews converted to Islam. To all intents and purposes, they are Muslim. But they remain aware of their Jewish ancestry, and this undoubtedly influences their views. Many are sympathetic to Israel. The Israel-Kurd magazine - whose editor disappeared without trace (reportedly kidnapped by Iranian agents) - was apparently an initiative of Kurds of mixed Muslim-Jewish ancestry.

There could be hundreds or even thousands of these cases.
It's an intriguing thought that the scale of forced conversions in Kurdistan might even approximate what occurred in Morocco (one in four Moroccan Muslims in Fez, for example, are reckoned to descend from Jewish converts) Yemen, and Iran. It could be a skeleton in the Kurdish cupboard of massive proportions.

Jews were under the protection of local tribal chieftains, or aghas. It is possible that these aghas seized Jewish girls as their wives.

A story doing the rounds in Israel tells that a military adviser was sent by the Israeli army to train the Kurds in the Sixties. He wrote that when he was invited one evening for a dinner at a Kurdish peshmerga army leader's house, a lady in that house brought him tea. When he looked at her, he thought he recognised her and  asked if she was Sarah. When she heard him calling her that name, she dropped the tray with all the tea on the floor out of  shock, and rushed out of the room. He  never saw her again. He added that when his family lived in northern Iraq, he had a sister by the name of Sarah who was kidnapped. He was sure that that lady was his sister.

This story echoes that told by  Ariel Sabar in 'My father's Paradise'. Ariel's aunt was kidnapped by her Muslim wetnurse as a baby, and never heard of again.

Of Kurdish barbers and Jewish converts