Minorities need a land of their own 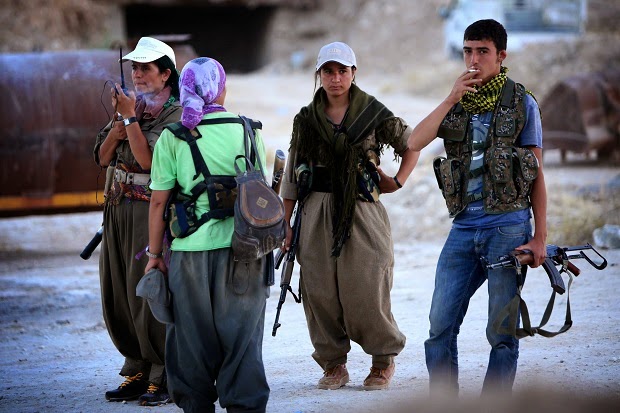 Female members of the Kurdistan Workers' Party (PKK) and an Iraqi Kurdish Peshmerga fighter take position on the front line in Makhmur, some 50 km south of Arbil, the capital of the autonomous Kurdish region of northern Iraq, on 9th August 2014. (Image: SAFIN HAMED/AFP/Getty Images)

What lesson can Jews teach Yazidis and Christians in Iraq? The unfashionable idea that without a homeland to call their own they will always be at the mercy of others, Ed West blogs in the Spectator (with thanks: Lily)

A clear lesson that the Yazidis and Christian Assyrians have learned is that without a patch of land for oneself, and soldiers to protect it, no people is safe.

Ten years ago, when the pogrom against Iraq’s Christians began with a number of church bombings and sectarian murders, Christian leaders in that country proposed an administrative area in the Nineveh Plains where Iraq’s minorities, including the Assyrians and Yazidis, and smaller but equally persecuted groups like the Shabak and Mandeans, would have political and military autonomy, with a police force composed of minorities to protect them.

Iraq’s more powerful groups rejected the idea, and the Americans did nothing to help; the counter-argument was that Iraq’s minorities should be encouraged to remain part of a multi-denominational country, and that a safe haven would be a magnet for jihadis. The former argument is fine in theory, but the latter looks rather irrelevant now.

The lesson of history, especially Europe’s, is that without a homeland or safe area of its own, no minority is ever entirely safe. The Kurds learned this lesson under Saddam Hussein. After 1991 Iraqi Kurdistan gained de facto autonomy. Now it looks certain to emerge as a nation-state. While I cannot say what will happen in the battle between the Islamic State and the Peshmerga (Kurdish fighters),
Kurdistan will certainly survive and will have even acquired a foundation myth, its status in the world elevated after a struggle against an evil enemy.

For a long time now there has been an idea among many western intellectuals that we had somehow outgrown the nation-state. No one told the Kurds, obviously. And while nationalism is discredited because of its associations with 1914-45, it can also act as a counter-balance to other forces, namely religious extremism. It may not be coincidence that Turkey, the one Islamic nation in the region with a very strong national identity, is the most resistant to Islamism; perhaps it is only a matter of time but second-generation Turks in Europe also seem far less prone to religious extremism than men whose families hail from weak states with multiple, competing identities, such as Pakistan. (I’m not suggesting this is the main reason — Pakistan is, after all, much more religious than Turkey.)

One Iraqi minority, of course, learned this lesson very, very painfully some time ago. Baghdad was one-third Jewish a century ago. Had Israel not come into existence, how might Iraq’s Jews have fared today? Not very well, I’d imagine.

Read article in full
Posted by bataween at Wednesday, August 13, 2014