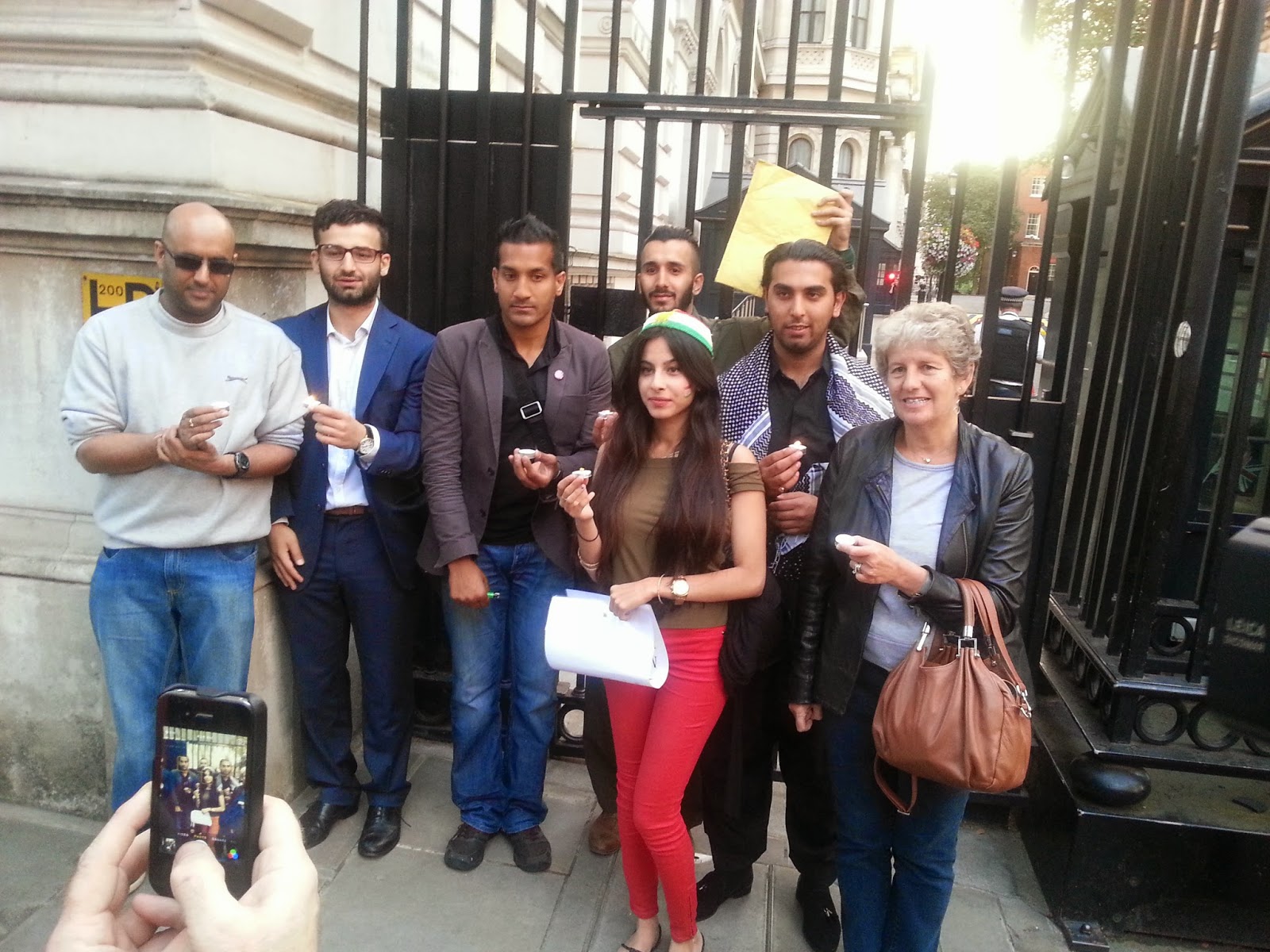 (Left:) Ranbir Singh of the Hindu Human Rights Group and Wilson Chowdhry of the British Pakistani Christian Association (third from left) together with Kurdish representatives and Lyn Julius of Harif  presented a petition to David Cameron, UK Prime Minister.

Some 500 demonstrators gathered outside Downing St yesterday evening  to protest noisily against the genocide and ethnic cleansing of Yazidis and Assyrian Christians in northern Iraq by the jihadist army ISIS,  also known as IS (Islamic State). Shouting 'Stop the crisis, down with ISIS", 'Today the Middle East, tomorrow the UK' and 'We are all peshmerga (a reference to Kurdish independence fighters)!" the crowd was dominated by a spirited contingent of Kurds, some in traditional dress.

Joining the protest, which was organised at short notice by Solidarity against ISIS and the British Pakistani Christian Association, was a group from Harif, the UK association of Jews from the Middle East and North Africa. A couple of Harif members, Michelle Huberman and Ralph Assor, gave interviews to LBC and Kurdish radio.

"We are here to stand in solidarity with persecuted minorities in the Arab and Muslim world," said Harif co-founder Lyn Julius." As we all know, Jews are, tragically, no strangers to genocide. The Jewish community, one of the oldest, was the first to be ethnically cleansed from Iraq. As the saying goes,"first the Saturday people, then the Sunday people. " What begins with the Jews never ends with them."

Mrs Julius added:" We are also here because we owe a debt of gratitude to the Kurdish people.  Kurds helped smuggle over the border Jews escaping from the tyranny of Saddam Hussein, and saved many Jewish lives."

In their turn Kurds greeted the Jewish protestors with enthusiasm, thanking them for their support. One referred to them as 'our brothers'. Some addressed them in Hebrew and confided that they had Jewish family members in Israel.

Lyn Julius was part of a delegation, including a Pakistani Christian, a Hindu human rights activist, a Sunni Muslim and several Kurdish representatives,  presenting a petition to David Cameron. The UK Prime Minister had just returned to Downing St from his holiday. The petition called on the British government "to live up to its obligations and prevent the vortex of genocide and killing taking any more innocent lives."

Harif members met a Yazidi Phd student at Reading University, one of 200 members of the UK community. A 4000-year old  pre-Islamic sect, the Yazidi religion combines Zoroastrianism with Jewish and Christian elements. Like Judaism, it does not proselytise. The Yazidi student, from Mosul,  had not had any news from his extended family in Iraq.

ISIS has been targeting the Yazidis - there are estimated to be some 200, 000 -  because they are considered infidels who must either convert to Islam or die. While the world  had begun to respond to the humanitarian disaster on Mount Sinjar, where Yazidis besieged by ISIS  were stranded  in the unbearable heat without food or water, stories abound of mass executions, beheadings, women raped or sold into slavery. ISIS buried alive hundreds of Yazidis, including women and children. 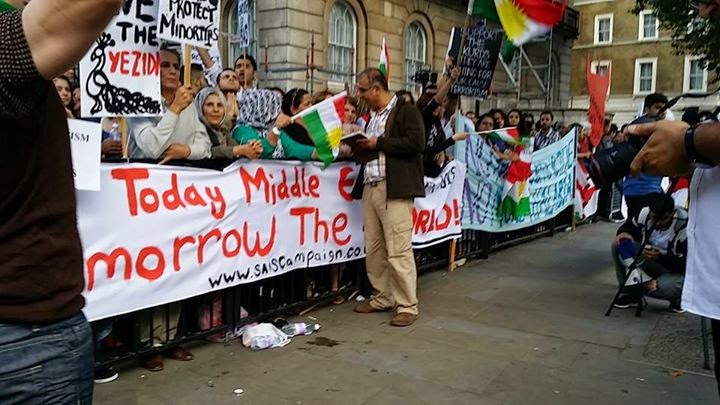 The predominantly Kurdish demonstrators chanted "Stop the crisis, down with ISIS!". (With thanks for photos to : Daniel J Levy, Sharon Da, Sai Arjun, Wilson Chowdhry.)


Report in the Jewish Chronicle
Posted by bataween at Thursday, August 14, 2014

Are Jews still allowed on the streets of London or has the government banned that and made them all wear yellow stars?

I agree with Anonymous. Sarcasm is tempting but risks making light of the very real dangers that loom not very far off.

But i hope that you know that america and israel created ISIS or al qaida, and many more, not muslims. All this Problems and deaths are caused by them. It has not just started know... Its nothing new...
I just Wonder how some people like this women in the picture where she held this sign with this description and some other jews think: "save the non- muslims of the middle-east"??! I mean what is this. So then the palestinian people should also write on there signs: "christians, muslims, druus,... SAVE THE NON-JEWS OF ISRAEL. "

Actually i think that is exactly what the people in gaza are needing. What israel is doing there for years and years is unbelievable killing , murdering civilianz. Its an Apartheid state.

Yes, the non-Jews of Israel are so unhappy there that none want to leave.