Ardent about argent from Yemen 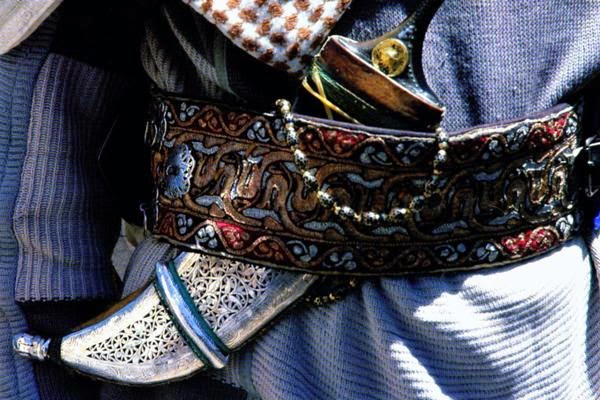 An American couple, Marjorie and David Ransom, have dedicated themselves to preserving the dying art of Yemenite silversmithing, traditionally a Jewish craft. Even though the Jews have left for Israel, Yemeni jewellers refer to their most highly prized and intricate work as 'Jewish'.  Review of a book by Marjorie Ransom in Al-Ahram:

Yemeni Jewish craftsmen were known throughout the Middle East for their delicate work: they had comprised much of the silversmithing craft in North Yemen prior to their 1949 exodus to Israel. Although there were many fine Yemeni Muslim silversmiths, the art for was clearly threatened when the Jews departed. Preservation became for us a principal goal,” the author tells the tale, the commencement of her infatuation with salvaging Yemeni silver accessories. Eventually she had so many precious pieces that she was unable to display them all simultaneously.

Ransom’s seminal work is not guilelessly divided into “North” and “South” Yemen. That would have been nothing short of obscene and unbecoming for a collector with a keen eye for precision.

The author took pains to distinguish the peculiarities of regional stylistic variations. From Saada and Amran in the far north of Yemen, regions that have recently been embroiled in civil wars to the Tihama on the Red Sea coast and the capital Sanaa, Taiz, Aden, sprawling Hadramout, Mahra and even the the enigmatic island of Socotra in the Indian Ocean, off the African continent.
“Sanaa, the capital of Yemen, is one of the oldest cities in the Arab world and one of the best preserved traditional Islamic cities in the Arabian Peninsula. It is also the highest capital city in the Middle East, situated at 2,295 meters above sea level.

In the heart of the old city is the salt market, or Suq Al-Milh, where the silver market, or Suq Al-Fidhdha, is located. It is where I lived for most of my time in Yemen and did much of my research. Silver dealers and silversmiths opened their homes to me as they shared valuable information about their craft,” Ransom recollects.

The craftsmanship of the indigenous Jewish  silversmiths in Yemen was stunning even with the most mundane everyday objects featuring highly intricate and alluring distinctive designs.

And, Yemeni women of yesteryear never bought silver jewelry on a whim. Ironically, Muslim Yemenis countenanced the Jewish silversmith’s ingenuity and inventiveness even if it subtly displayed uniquely Jewish religious imagery and inscription such as the Star of David. Silver jewelry was traditionally brought for a specific purpose, invariably as bridal appurtenances.

Contemporary Muslim silversmiths have scrupulously adhered to the age-old Jewish classical styles. “Although most Jews left Yemen in the late 1940s in Operation Magic Carpet, which took Jews from Aden to Israel, silver dealers to this day will use as their best sales pitch that the piece is shughl Yahoudi, or Jewish work,” Ransom extrapolates.

Read article in full
Posted by bataween at Thursday, August 14, 2014