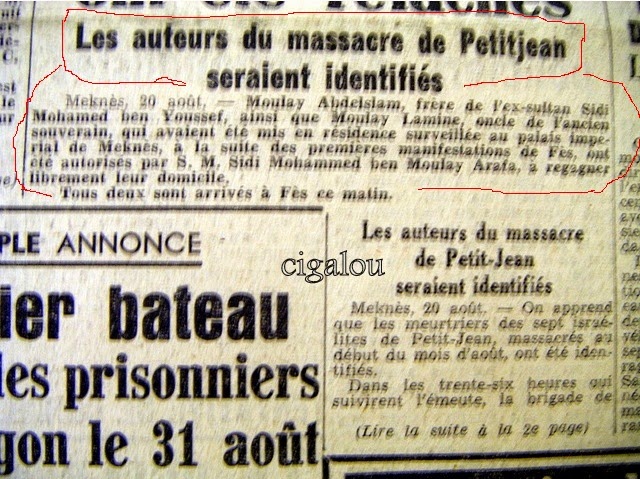 Sixty-years ago this month, Morocco was in turmoil as it struggled for independence from France.  On the first anniversary of the deposing of the Moroccan sultan, who was sent into exile to Madagascar, Jews found themselves targeted by Moroccan nationalists. On 3 August 1954, a pogrom erupted in Sidi Kacem (Petit Jean), 20 km from Meknes: six Jews were killed. More about this pogrom soon.

Here is a JTA report from 12 August 1954 describing the aftermath of the pogrom:

"Twenty-five thousand Jews in Morocco have registered with the Jewish Agency for emigration to Israel, it was announced here today. In view of the tense situation in Morocco, the Agency started negotiations with an Israeli shipping company for their transportation. The first group of 600 will arrive tomorrow, followed by another group of 1, 000 by the end of this month, and 2,000 more in September.

A number of well-to-do Jews in Morocco have received threatening letters from Arab terrorists, ordering these Jews to leave the country within three months, it was reported here today by David Rubino, a merchant, upon his arrival from Casablanca.

Mr. Rubino, in giving the first eye-witness report on the Moslem terror against Jews in Morocco, said that seven Jews lost their lives in the pogroms in Fez and Petitjean last week. Many other Jews, he reported, were injured, shops were looted, businesses and artisans’ booths that had been maintained by Moroccan Jews for generations were smashed by the rioters. 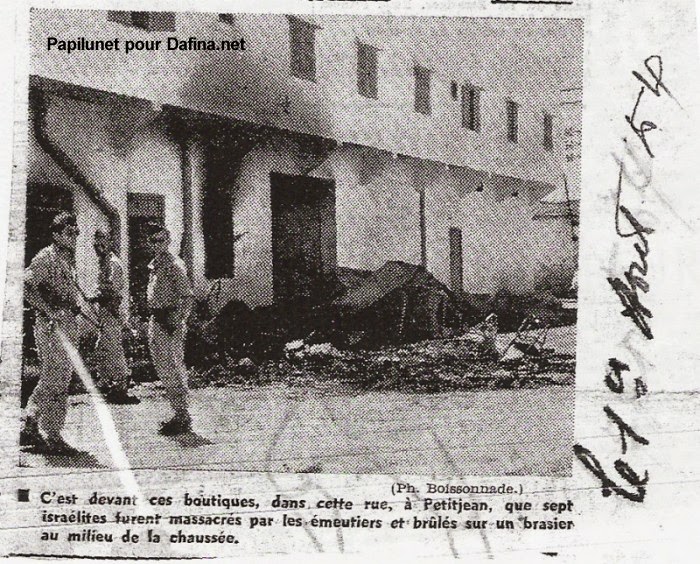 The scene in Petit Jean following the pogrom of 3 August.


“The terror is not aimed specifically against the Jews,” he declared. “The terror has its own political motivation. But Jews are suffering, and losing their lives. Most Moroccan Jews want to leave the country, want to emigrate to Israel. This includes many who, up to very recently, had no particular desire to go to Israel. These have changed their minds overnight, because of the pogroms. “


Read article in full
Posted by bataween at Friday, August 29, 2014

Thanks for this, I will try and provide more detail.

English translation here: in August 1953 riots took place in the city of Oujda, during which four Jews were killed, including an 11-year-old girl in the same month. French police prevented a Muslim mob break into the Mellah of Rabat. [35] In 1954 the town Ftiz'an (now known as Sidi Kasem) saw anti-Jewish riots again, during which seven were killed and their bodies brutally abused. In 1955, crowds of Muslims stormed the Jewish Quarter in Sagan and ransacked dozens of homes. 1700 Jews escaped and found refuge in some European city. A large number of houses in the Jewish Quarter were set on fire and burned to the ground and 200 Jews were left homeless to return. [36] as part of the same wave of riots in the city of Wadi Zem (Oued Zem (N '))riots broke out which killed a family of five and two other Jews. [37]

if your aim is to terrorise us, then you have succeeded!
sultana