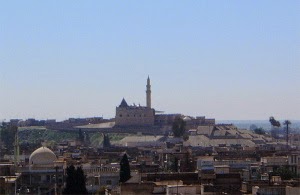 The tomb of Jonah dominated the city of Mosul, now in the hands of ISIS


Confirmation that ISIS, the Sunni jihadist terrorist army sweeping across Iraq, has destroyed Jonah's tomb in Mosul*, has come to us in a roundabout way. The Mufti of Egypt has condemned ISIS in strong terms for the destruction. According to a report in the Arabic press, the Mufti declared that the destruction of holy sites has 'nothing to do with Islam or any religion'. (With thanks: Maurice)

News Online - "The Mufti (the Muslim spiritual leader who issues religious edicts) of the Republic of Egypt, Dr. Shawki Alam, denounced the ISIS (The Islamic State) terrorist organization act of demolishing the shrines and the sites of the prophets and righteous people in Iraq, and most recently the demolition of the tomb of God’s Prophet Younus (Jonah), peace upon him.

"It is an act that has nothing to do with Islam or any religion, and also exceeded all the limits of normal human nature that respects the sanctity of the dead (people) and exalts their holy sites. The Mufti of the Republic indicated that these extremists are ignorant of the spirit of the Islamic religion and did not read the biography of .... prophet (Muhammad) ……, which mentioned that the prophet,… lived for 13 years in Mecca and came nowhere near the idols of the infidels, which were in the hundreds, so how could (he come close) to the tombs of the prophets and the righteous?! "

The Mufti of the Republic appealed to the responsible authorities in Iraq, the international organizations that are concerned with the humanitarian heritage such as UNESCO and others to quickly and urgently intervene to protect the Islamic holy sites, which are among Iraq’s cultural, historical and archaeological monuments."

Appeal to UNESCO to save shrines (French)

*Misleading video: A video purporting to show ISIS destroying the tomb of Jonah has been circulating recently in the western press. It bears an uncanny  resemblance to this 2013 video, disseminated by the Iranian Press TV, showing the destruction of so-called Jewish tombs in Syria.
Posted by bataween at Tuesday, July 15, 2014

how can we convince ignorants that the are wrong?
sultana

Wow.. I guess in his sick and twisted mind,the slaughter of 10's of thousands of people by ISIL was perfectly fine, but "god forbid" the destruction of man-made artifacts was too much to be ignored.