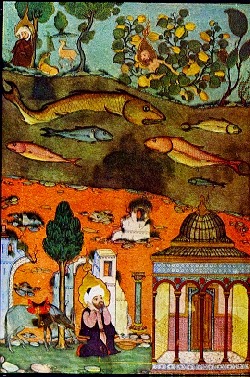 16th century illustrated Turkish manuscript showing Jonah and the whale (top) and Jeremiah in Jerusalem. The fate of the tomb of Jonah in Mosul, now under ISIS control, is not known

One cannot escape the irony that there are no Jews left in Syria and Iraq to massacre: Syrian Jews number a handful, and there are just five Jews in Iraq. Nevertheless, threats of a Jewish Holocaust are a useful recruiting tool, the Algemeiner reports:

“The Real Zionist Holocaust is Predicted in the Hadiths! The Hour [resurrection] will not take place until the Muslims fight the Jews and the Muslims kill them, and the tree will say: “Oh, Muslim, servant of God, there is a Jew behind me, kill him! THE PROMISED Holocaust,” a graphic posted on the @ISIS_Conquests’s Twitter account said.

This hadith has proven popular with Islamic extremists of all stripes, ranging from IS to Hamas - and even on television in the Middle East.

Daniel Pipes, an expert on jihadism, said the hadith likely was a recruitment tool.
“​Yes, ​calling for a Holocaust against Jews refers to a violently anti-Semitic strain among jihadis and will surely appeal to some of them,” Pipes said in an email to the Investigative Project on Terrorism.

Anti-Semitic propaganda has played an important role in the terrorist group’s recruitment efforts. Its leader, Abu Bakr al-Baghdadi, placed Jews on the side of evil in a speech posted last Tuesday on the Internet in which he called on Muslims to join him.

“O ummah of Islam, the world today has been divided into two camps and two trenches … The camp of Islam and faith, and the camp of kufr (disbelief) and hypocrisy … all being led by America and Russia, and being mobilized by the Jews,” al-Baghdadi said.

In another such video released on Twitter, IS told jihadists to “Break the crosses and destroy the lin­eage of the grand­sons of mon­keys.”

ISIS sounds more and more like Obama every day.

grrrrr, you are getting the whole things backwards and helping those against Israel
*bangs head*

Thinngs are getting worse for us since the death of a Palestinian youth rumoured to have been burnt alive.
Here in Europe. All the old hatredS are coming to the surface.
The Arab propaganda machine is very well trained to turn the tables on us
sultana

http://www.haaretz.com/jewish/news/1.626127?v=151330692E244A8441CD74C30855785C
French Islam Convert With Jewish Father Dies Fighting With ISIS in Syria
Raphael Amar's father says 'there is a phenomenon in which some French Jews who were not brought up very Jewish are radicalized.'

Raphael Amar, 22, died last month in Deir ez-Zor in Syria’s east, according to a report Tuesday by the Israeli daily Ma'ariv. The report was confirmed by Sammy Ghozlan, founder of the National Bureau for Vigilance Against Anti-Semitism, or BNVCA.
--malca