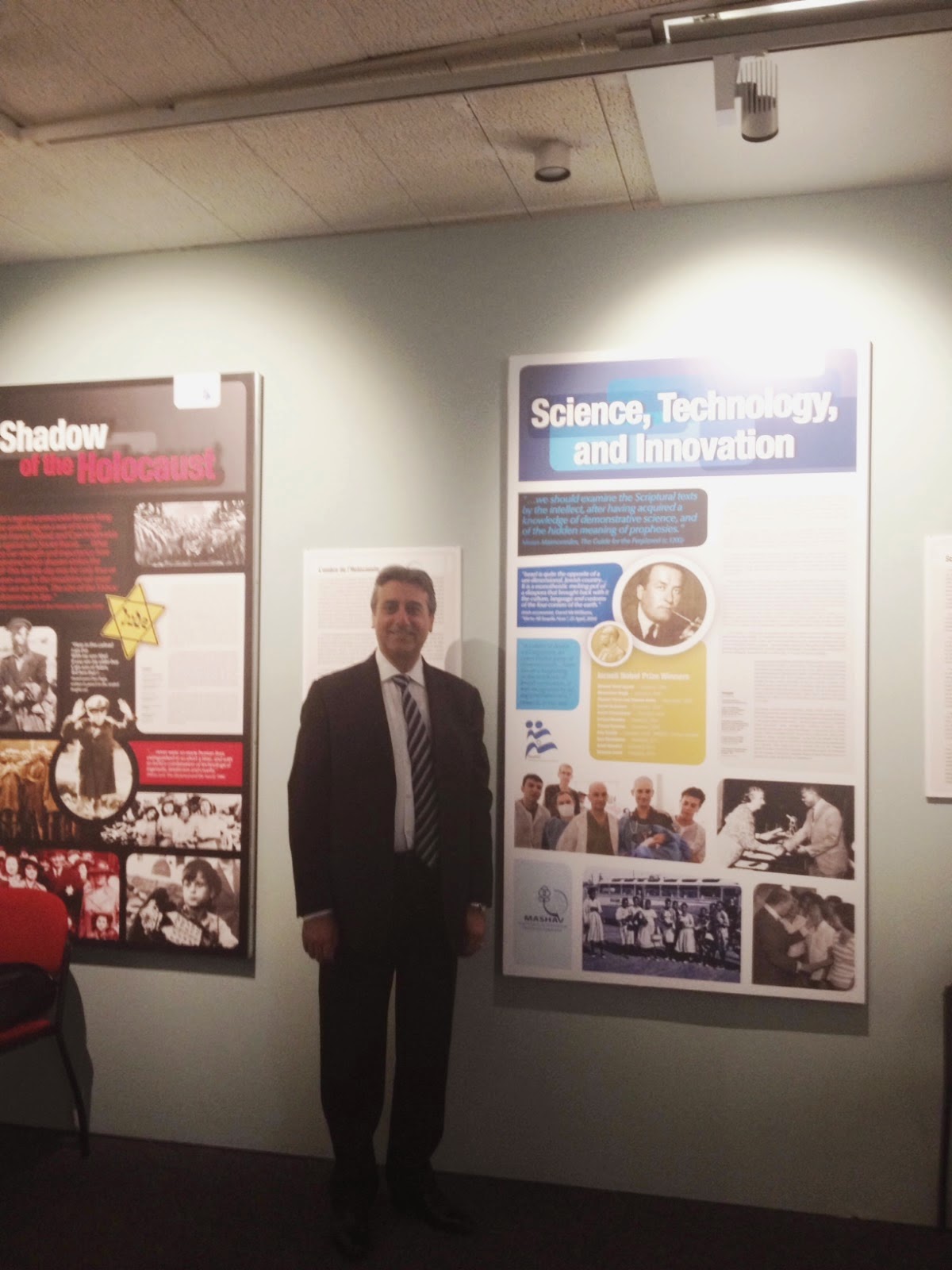 
An 'offending panel' on Jews from Arab lands was dropped because UNESCO feared that Arab nations would block the recently-opened exhibition People, book, land: the Jewish people's 3,500 year links with the Holy Land, Robert Wistrich, the exhibition architect, tells the Times of Israel. The panel will be re-instated in a book of the exhibition, promises the Simon Wiesenthal Center, the exhibition organisers. (With thanks: Eliyahu)

“It is true that UNESCO officials asked us to drop the panel because they felt certain that Arab nations would protest and block the exhibition,” said Rabbi Abraham Cooper, associate dean at the Simon Wiesenthal Center, which organized the exhibition. The removed panel consisted primarily of visuals depicting the Jewish refugees’ absorption in Israel in the 1950s and 60s, he told The Times of Israel. “We reluctantly agreed,” he explained, adding that the exhibition’s author, Hebrew University Professor Robert Wistrich, did insert, in a different panel, “the statistics about Aliyah from Arab nations, which we insisted be included.”

Since 1948, roughly 850,000 Jews fled persecution and violence in the Middle East and North Africa, about 650,000 of whom immigrated to Israel. The Israeli government has raised the issue of Jewish refugees from Arab states repeatedly in peace talks with the Palestinians.

Speaking to The Times of Israel on Tuesday, Wistrich said that he was very disappointed that the section needed to be removed, but explained that there was no other way to get UNESCO to go ahead with the exhibition.

“Obviously I tried to do what I could. I went through the trouble of carefully preparing what I thought was a very balanced and thorough section. To me it was important — it was part of my original design and concept,” he said, referring to the panel on Jewish refugees from Arab countries.

However, he added, from the perspective of UNESCO, the topic was explosive, because he showed “that the Jews in Arab land had suffered a great deal. The panel described their dhimmi conditions as subordinates and all the humiliations and discriminations that involved. It also went into detail on a series of pogroms, which occurred in different areas in the Arab world.”

The controversial panel meant to show that Jews living in Arab countries had ample reason to be drawn to Israel, and it was not merely “Zionist propaganda,” Wistrich said. In fact, in an early version of the panel, Wistrich had described the fate of Jews in Arab countries after 1945 as a “form of ethnic cleansing,” expecting that this characterization would be contested.

“I went some way to change the language but it wasn’t enough,” he recalled. “In the end, [UNESCO] said if you want the exhibition as a whole to succeed, you cannot give any pretext to member states to protest,” since they had the power to prevent the exhibition altogether.

“Their argument all the way through, whenever there was a controversial issue, was that in order for this to go through we have to establish a maximum level of consensus with member states and this will act as a red rag to the Arab states,” Wistrich said. “Obviously they don’t want to see themselves being portrayed as they really were and are.”

Knowing the entire exhibition could be jeopardized if he insisted on the panel, he decided to compromise. “It’s a little bit like in chess game, if you look at it strategically. You have to give up a pawn or a rook and you do that in order to attain your ultimate objective,” he said. “In this case it seemed to me straightforward politics, and there was no way around it.”

However, Wistrich added, he managed to “slip in a few sentences” about the subject in another panel, which remained in the exhibition and can currently be viewed at UNESCO headquarters in Paris. This panel explains that 20 years after Israel’s creation, half its Jewish population hailed from Middle Eastern countries, where they had been subjected to dispossession, harassment and persecution. “They let that go through,” Wistrich said.

The Wiesenthal Center plans to publish the exhibition as a book, in which the removed panel will be reinstated, Wistrich added.