Who will save what's left of Jobar? 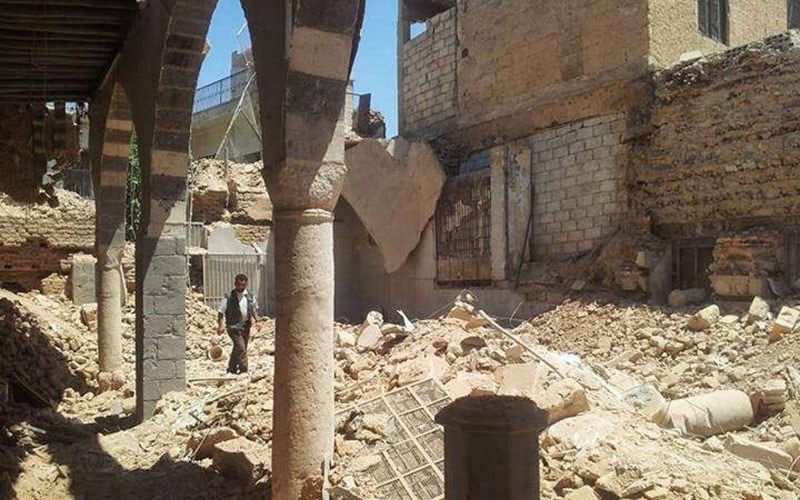 Photographs published by the Daily Beast show conclusively that two-thirds of Syria's ancient Jobar synagogue has been reduced to rubble.


Over the last year, there was a series of false reports that the Jobar synagogue, associated with Elijah the Prophet, had been destroyed or badly damaged during the Syrian civil war. Now recently published photographs show conclusively that this ancient synagogue near Damascus, at least 400 years old, has been destroyed. Assessing the damage in Haaretz, Adam Blitz warns that this latest disaster to befall Jewish heritage in the Arab world will inflate the value of artefacts that may find their way onto the international art market.

On Tuesday 27 May 2014, The Daily Beast published an article entitled, “Exclusive Photos: Syria’s Oldest Synagogue Destroyed by Assad.” My immediate reaction was one of caution.

Jobar has been a perennial a “mover and shaker” in Syria’s rhetorical war. It was currency to both rebel and regime as they traded blows in battle and in print. Beyond the battlefield of Syria, Jobar had also been held captive by an army of journalists, never to be set free. It had been associated with a host of claims, some of which were nothing short of miraculous –claims that it had been destroyed, but then was seen standing again, 'resurrected'. The majority of other claims were at best unsupported and at worst simply untrue.

Sadly this particular story was true. Jobar had previously survived an assault on its street-front façade and its administrative first floor suite. It still stood after a missile attack on its roof and the resulting wound to the ceiling. This time was different. After four hours on the 'phone and several more perusing digital images, I had to concur that, with the exception of a side wing, the synagogue had been destroyed. Based on the photographic evidence at least two-thirds of the structure had been reduced to rubble.

(Unfortunately Jobar has not been the study of scientific archaeological or architectural research. We are therefore dependent upon the Daily Beast’s visuals - which can of course be misleading.

As with the other Syrian synagogues such as Aleppo’s Bandara or Damascus’ Al Franji, the plan of Jobar conforms to that of a (Roman) basilica. It followed the classic tripartite plan with two arcades (arches and columns) flanking the central aisle or nave. This was the main area of activity. Halfway down the nave was the wooden teva (bimah). Immediately to the front was an ornate Aron Kodesh (hechal) or Ark built into the front wall in which the 43 scrolls had, until recently, been housed.

Again, in keeping with the design of other Damascene synagogues, three separate roofs covered the three distinct sections. All of the roofs had exposed (typically poplar) beams which ran horizontally upon two main vertical supports. Jobar’s nave was substantially taller than that of the flat-roof wings. Its walls were punctured with very high windows, well above the ceiling to the left and right adjoining sections.

From the Daily Beast’s photographic evidence we can conclude the following:
1. The rear of the synagogue: this is where the large stone of Elijah with its monumental menorah originally sat. On the left of the first Daily Beast photograph is the synagogue’s “right” side aisle or wing with its arcade, whose ceiling has withstood bombardment and appears, for the most part, intact; the columns and arches remain in situ. The parallel colonnade, which would have demarcated the Left Wing, is clearly missing, as is the beamed ceiling for the wing and for the nave. Several blocks of columns, capital and window units litter the ground. A large section of roof hangs precariously.

2. The second image was taken from the same locus but 180 degrees facing the synagogue front rather than the rear. It reveals the entrance to the small ante chamber leading to the Shrine of Elijah. This is discernible from the small hexagonal column in view and the alabaster capital in relief. The latter is in fact part of a pair of columns and capitals which adorned the entrance to the ante chamber immediate to the right of the Ark. The photograph also shows the front of the synagogue where the teva (bimah) and ark once stood. There is no evidence of the Left aisle, arcade, teva or Ark as would ordinarily be expected.