What we can learn from UNESCO silence 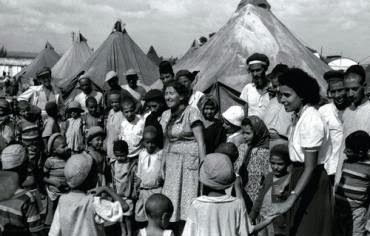 Yemenite Jews in a ma'abara (transit camp) in the 1950s

UNESCO has come under fire for insisting on the withdrawal from its Paris exhibition on the Jewish people's age-old relationship with the Land of Israel a panel telling the story of Jews driven from Arab countries. In this piece for the Jerusalem Post, David Matas articulates brilliantly the reasons why this story does more to combat anti-Zionism than any other. If we can learn that lesson from the UNESCO cover-up, it will have done us a favour.

The exhibit had one gaping hole: the story of the movement of Jews from Arab countries to Israel. There is one sentence in the panel titled “Israel among the nations” which says, “By 1968, Middle Eastern Jews already represented 48% of the entire Jewish migration to Israel.” And that is more or less it.

Robert Wistrich had prepared a panel on Jews from Arab countries for the exhibit, but UNESCO vetoed it. It was made clear to Wistrich and the Simon Wiesenthal Center that, if they insisted on this particular panel, the exhibit would not take place.

The exhibit counters many different elements of anti-Zionist propaganda. Why was there silence on this issue pertaining to the history of the migration of Jews from Arab countries to Israel, the red line for anti-Zionists? The answer is that this story does more to counter anti-Zionist mythology than any other. (Emphasis added)


Anti-Zionist mythology says that Jews are outsiders who have come from Europe and North America to colonize Arab territory.

The fact that half of the Jews of Israel are descendants of those who have lived continuously in the region since time immemorial undermines this myth.

Anti-Zionist mythology portrays Palestinian refugees as victims of the creation of the State of Israel. The fact that there were two displaced populations and that the Jewish displaced population was more numerous than the Palestinian one shifts the blame for refugee victimization to the place where it belongs: anti-Zionists and their attacks on the existence of the State of Israel.

Anti-Zionists attempt to mobilize sympathy for the underdog by portraying the Palestinians as victims and Israelis as perpetrators.

The existence of an even larger population of displaced Jewish victims from Arab states guts this narrative of Palestinians as unique underdogs.

Jews expelled or driven out from Arab countries were resettled outside the region or locally integrated in Israel. Anti-Zionists have refused to contemplate for Palestinians either resettlement or local integration; anti-Zionists would rather keep that population in enforced misery as hostages to anti-Zionist rhetoric, as fodder for propaganda against the existence of Israel. The contrast between the hospitality Israel has offered to Jewish refugees and the hostility Arab states have manifested to Palestinian refugees is stark. Anti-Zionists want to ensure that this contrast remains hidden.

It was irrational for Arab states, at one and the same time to combat the existence of a Jewish state and to be instrumental in its creation through the expulsion of their Jewish populations, who inevitably, for the most part, ended up in Israel. The only consistent explanation for both Arab state behaviors is hatred for Jews in their midst. That is a story that, understandably, Arab states did not want told.

Palestinian peace negotiators have argued that whatever injustice was done to Jewish refugees from Arab countries was not inflicted by the Palestinians. This position ignores the fact that many of the Jewish refugees generated by the wars against the existence of Israel, about 40,000, came from the West Bank and Gaza.

Be that as it may, the refusal of Arab states to confront the reality of the injustice to Jews from Arab countries, which their opposition to the insertion of this issue in the UNESCO exhibit illustrates, means that if the issue is not dealt with in Palestinian-Israeli negotiations, it is not likely to be dealt with at all.

We need to take a cue from the anti-Zionists’ own rankings. If what is central to the core of anti-Zionist propaganda is the covering up of the story of Jews from Arab countries, then that story must be central to combating anti-Zionism. If we can learn that lesson from the UNESCO cover up, it will have done us a favor.

Wiesenthal will reinstate 'offending' board

The truth is that neither Robert Wistrich nor the Wiesenthal Center protested too much. There is enough evidence from Arab sources, magazines and newspapers, to make a case.

Once we complained about the scarce information about Jews of Arab countries in Israeli textbooks.

Now this exhibit should be called "Fifteen Words out of Fifteen Thousands".

There are influential intellectuals in Israel who want to maintain that trend of erasure as well as a policy of constant humiliation. Not a day passes without a newspaper or a public figures insults, degrades and debases.

The real question is: why do we let them?

If Jews from Arab and Muslim lands constituted 10 per cent of the Jewish population pre-1948, then we are entitled to at least 40 pages.

Meir Gal is right. But it is irritating that he lapses into the crude cliche of Arab-Jew-as victim-of-the Ashkenazi establishment. We are proud Zionists whose story has been sacrificed on the altar of political correctness - mainly by Ashkenazi leftists.

They were the majority until the end of the nineteenth beginning of 20th century.

There was NO physical Ashkenazi connection to the land to speak of, nor meaningful contribution (except by some Rabbis)until the end of XIXth century.

In 614 on the eve of the Muslim conquest Persian Jews got to administer Jerusalem as a result of an alliance with the Sassanids against Byzantines, very likely arranged by the Exilarch of the day, Bostenai.

Nahmanides built a Sephardic synagogue in 1270 in what was to become the Judeo-Maghreban quarter(Harat al Maghariba), now known as the Jewish quarter. They were joined two centuries later by the exiles from Castile.

Just the Maghreban Jews within the Sephardic community counted 2000 members by the middle of the 16th century and kept growing until they were expelled from Jerusalem in 1948.The Harat al Maghariba contained synagogues and bateh midrash.

And of Course the Nasis and the Tiberias project.

The first to call Jews to emigrate en masse to Jerusalem was Yehuda Bibas in the 1820s-1830s, long before Herzel. Bibas was born in Gibraltar in a Moroccan family and became the Rabbi of Corfou. He justified theologically a physical alyah, and has influenced Yehuda Alkalai who publisheed his book in 1840.

The Messianism of Sabbatai Zvi and David Reuveni who sought a "return of the exiles"also deserves a mention.

And I bet you heard that the first neighborhood in Tel Aviv was founded in 1909 by six Ashkenazi families among them Jeremy Ben Ami family.

The truth is the first Tel Aviv neighborhood was Neve Tzedek, founded in 1887, 22 years earlier, by Aharon Slush, and Algerian Jew who emigrated to Jaffa and became a successful business man.

This off the top of my head, but there is plenty more.

Zionism isn't responsible for this situation, people are.

I meant that Mizrahi/Sephardi Jews were 10 percent of the global Jewish population. They were of course a majority Eretz Israel, as you rightly say, before the first Aliyah.


Out of 24 panels, an insertion of 15 words articles and prepositions included?

What were they thinking? Perhaps that no one would notice.If you were not there we probably would never have known. I didn't see it mentioned in the Hebrew media.

without a doubt - if JJAC hadn’t been there, no-one would have noticed.

The propaganda that the East European Jewish diaspora's role in bringing about the reality of Jewish independence in the Jewish homeland makes Zionism a suspect and a colonial European enterprise fits right in with leftist and Ashkenazi leftist ideology. Disgusting. Jews of the Islamic world are not the only Jews who are legitimately in the Land of Israel.